It never fails that just when I think I’ve seen it all I get surprised by some “new” insect. That happened on September 5, 2009, when I photographed a small wasp carrying a fly. Surely that must be a species in the Crabronini tribe, I told myself. I was dumbfounded when I downloaded the image and realized it was nothing I was already familiar with. Detective work ensued. 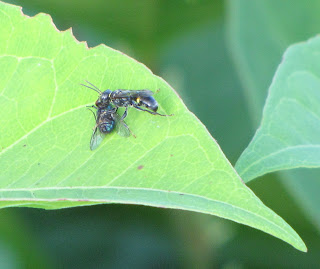 I posted the image above to Bugguide.net in hopes that another wasp expert might recognize it. Possible identifications were offered, but none of the suspects matched in terms of either morphology or prey selection. The mystery deepened.

I next went to my good friend and mentor Arnold Menke, a hymenopterist retired from the USDA Agricultural Research Service at the National Museum of Natural History. He literally wrote the book (Sphecid Wasps of the World) on the larger group of wasps that my specimen belongs in. Arnold also enlisted the help of Woj Pulawski at the California Academy of Sciences. We were conducting our correspondence over e-mail.

Meanwhile, my own continued research led me to believe that I had imaged a female Mellinus bipunctatus. I found images of other species in that genus carrying flies in a similar manner; and a close look at my image seemed to show that the wasp has a petiolate (“stalked”) abdomen, a character not shared by other fly predators of similar size (8-10 millimeters).

Arnold was initially unconvinced, believing it to be in a different subfamily. I had to agree, except for the fly prey factor. I created a guide page back on Bugguide for the genus Mellinus and moved my image there, adding my suggestion for the species. That coincided with a visit to Bugguide by Matthias Buck at the Royal Alberta Museum in Edmonton. He was delighted because Mellinus bipunctatus is a rarely-seen species.

Back in Arizona this year, I imaged another species of Mellinus while photographing small blow flies on some scat at the edge of Sabino Creek in the Sabino Canyon Recreation Area on April 13, 2010 at about 1 PM. Like pigeons reacting to a falcon, all the flies flew when the wasp alighted. 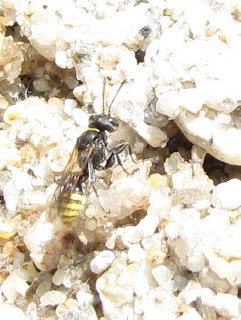 This image was yet another challenge, and Arnold sent me a couple reprints on the genus this time, one of which he co-authored. I also posted a link to my image on the professional entomology listserv I subscribe to, and received positive responses from Doug Yanega at UC Riverside, and James R. Wiley at the Florida State Collection of Arthropods. Doug suggested there was a possibility it was a new species given how uncommon these wasps are. Jim Wiley suggested the species M. imperialis, which was supported by Matthias Buck and also by Carl Olson, Associate Curator of Entomology at the University of Arizona. Carl found a specimen collected by Richard Bailowitz at Organ Pipe National Monument in 1987.

I went from the exhilaration of a potential new species to a possible state record, to not even a county record (dang western states with those huge counties…grumble, grumble). Ah, well, I know Rich and I’m happy that he got the first Arizona record.

Oh, you want to know something about the biology of these wasps? Virtually all we know comes from observations of the European species M. arvensis which is oddly common. These are “digger” wasps, excavating burrows in sandy soil, often in the company of other members of their species. The burrows extend 30-50 centimeters underground, terminating in one to ten individual cells. Four to nine paralyzed flies are provisioned in each cell, an egg laid on the last victim. The cells are closed with an earthen plug when finished, but the entrance to the main tunnel is left open while the female hunts.

The wasps hunt mostly in the vicinity of fresh manure, with males staking out territories there and intercepting females to mate with them. Observers note that the females stalk their prey in feline fashion, slowly creeping up behind an unsuspecting fly, then pouncing and pinning the fly’s wings while stinging it underneath its body. Once the prey is subdued, the wasp turns it over, grabs the fly by its mouthparts, and flies off. 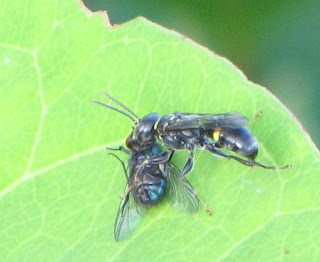 Given that the bulk of the prey taken by Mellinus are muscoid flies (house flies and their kin), it is a shame the wasps are not more plentiful. They could be employed as biological controls of such “filth flies,” thereby improving rural sanitation.

Special thanks to all of those mentioned above, plus Julieta Bramblia who enlisted Jim Wiley’s help on my behalf. Entomologists rarely work alone, and we are privileged to have so many helpful colleagues.