Some spiders are so strange that they defy even experts to properly classify them. Such is the case with the genus Coras, which includes some very common species like C. medicinalis that spin funnel-like webs in and around human structures as well as natural settings. 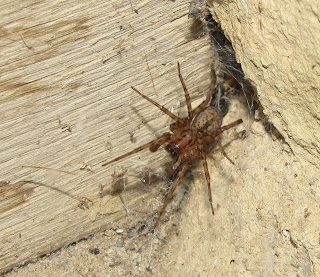 First described by Nicholas Marcellus Hentz in 1821, C. medicinalis was placed in the genus Tegenaria. Charles Athanase Walckenaer put it in the genus Clubiona in 1837, but this move was not accepted by the bulk of his peers. So, he returned the species to the genus Tegenaria but changed the species to T. nemorensis. Hentz reasserted his intial name on two occasions, in 1847 and 1867. Eugen von Keyserling, in 1887, proposed Coelotes as the proper genus, and urbanus as the species name. Have I lost you yet? No? Good, because it gets more complicated still.

Even more astonishing, the genus Coras has bounced between families like a taxonomic pinball. Frederick Octavius Pickard-Cambridge originally placed Coras in the subfamily Coelotinae of the family Agelenidae. This genus, as well as the closely-allied genus Wadotes stayed in the Agelenidae until 1986, when Joerg Wunderlich moved them to the family Amaurobiidae. What was wrong with that, you ask? Well, one of the defining characteristics of the Amaurobiidae is the presence of an “extra” plate-like silk-spinning organ called a cribellum, located just in front of the spinnerets. The thing is, Coras and Wadotes don’t have this structure. Just this year the two genera boomeranged back to the Agelenidae, though I cannot presently find the journal article confirming this.

Thankfully, the biology of Coras is more straightforward. There are fifteen species in North America, all of them found principally east of the Mississippi River (southeast Canada south to Florida and west to Wisconsin and Louisiana). The genus can be identified in part by the eyes. The anterior median eyes are larger than the anterior lateral eyes. That means that the row of eyes nearest the jaws has the middle pair larger than the outer pair. I find the pattern of dark lines on the carapace to be fairly diagnostic as well. 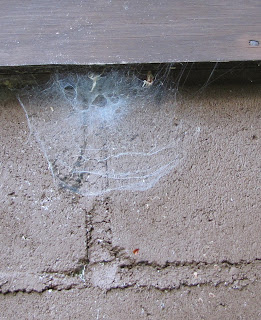 Their webs are generally not as large as those of other funnel-web spiders, perhaps because the spiders themselves are not that large. Mature females average between 8 and 13 millimeters in body length, males 8-10 millimeters. Adult spiders are found in summer and fall. Egg sacs are probably produced in autumn since both adult and juvenile specimens have been observed hibernating in silken retreats under rocks during the winter months.

The webs may be well off the ground as evidenced by the one shown above. It was attached to the exterior of a pump house in Mount Sugarloaf State Reserve in South Deerfield, Massachusetts. The multiple retreats, instead of singular, is typical of the genus, too. These are spiders of forested habitats that also build their webs from beneath stones, from crevices in rock walls, and from loose bark on trees and logs. They are not strangers to basements or cellars, though, so look for them there as well. 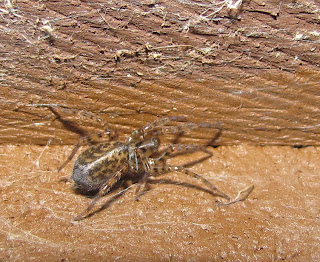 Coras medicinalis acquired its species name from Hentz’s knowledge that the webs of this spider were used to make a tincture (alcoholic extract) for the relief of fevers back in the 1800s. Good to know we have advanced in our pharmaceuticals since then, leaving us free to simply enjoy these spiders on their own merits.