Just to clarify, this lesson is for people, not spiders. Spiders already know how to do it. Wait, that didn’t come out right, either. What I mean is, this is a primer on how to tell spider genders apart, and show why it is so difficult to properly identify your average arachnid. 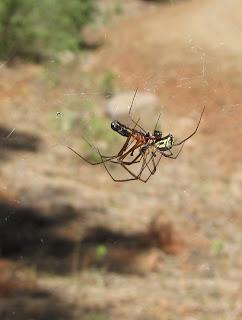 Immature spiders cannot be identified to species (sometimes not even to genus) because they lack developed external genitalia that are species-specific. It is even more complicated than that because more “primitive” types of spiders don’t have complex genitalia anyway. Tarantulas, trapdoor spiders and their allies, collectively known as the Mygalomorphae, don’t have fancy equipment.

Next up on the ladder from mygalomorphs is another large clade called Haplogynae. The term has Greek roots and roughly translates to “half woman.” Among familiar haplogyne spiders are crevice weavers (Filistatidae), recluse spiders and their kin (Sicariidae), cellar spiders (Pholcidae), and spitting spiders (Scytodidae). Mature female haplogynes have a relatively simple genital opening known as the gonopore, accessed by the male through her “epigastric furrow.” The epigastric furrow is a simple transverse slit on the underside of the female’s abdomen.

Male spiders of all species do not have a penis, so they have evolved to use their pedipalps as intromittent sex organs to transfer sperm to the female. Pedipalps are the leg-like mouthparts nearest the spider’s face. The male spider prepares himself by spinning a small sheet of silk called a “sperm web.” He then extrudes seamen onto the sheet and sucks it up into a reservoir inside each pedipalp. He is now ready to go hunting for a mate. Males always wander to find a mate, even those species normally confined to webs.

Male mygalomorph and haplogyne spiders have no need for elaborate pedipalps because the female’s genital opening is correspondingly simple. Not so with the most highly-evolved spiders, the Entelegynae. Greek for “whole woman,” the term describes the much more complex genitalia of both genders. The overwhelming majority of non-fossil spiders fall within this group.

Sperm from the male goes into the female’s oviduct during mating in haplogyne spiders; and the sperm exits the same duct when the female lays her eggs. The sperm goes in one duct (copulatory duct) and out another (fertilization duct) in entelegyne spiders. Females of all types of spiders are capable of storing sperm from one mating for use their entire reproductive lives. This storage tank is called the spermathecae. 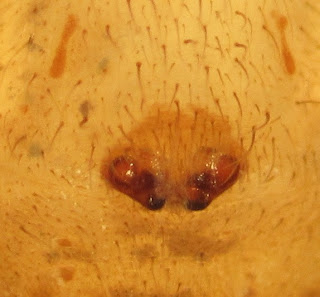 Female entelegyne spiders usually have a sclerotized (hardened tissue) “door” to their genitalia, located on the underside of the abdomen just above the epigastric furrow. This apparatus is called an epigynum (image above). It is usually composed of two openings, such that the structure has a symmetrical appearance. It is key to identifying many spiders to genus and species that otherwise look virtually identical to other, unrelated spiders.

The epigynum is more like a “lock” to the spider itself, as only males of the same species are able to mate with her. The male’s pedipalps are correspondingly complex, the “keys” to her “lock.” Male spiders that are one molt away from adulthood are termed penultimate and their pedipalps are swollen but not completely formed. The terminal segment changes radically with that last molt. 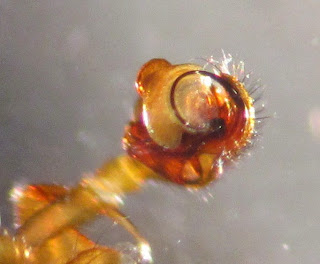 The image above shows the ventral (underside) view of the pedipalp of a mature spider. The dark, circular line is the “embolus,” the appendage that enters the female’s epigynum. The area behind the embolus is the “bulb” in which the sperm is stored. The bulb rests inside the cup-like dorsal plate called the “cymbium.” The pedipalp can also have various processes and projections on the cymbium and/or the patella or tibia segments. 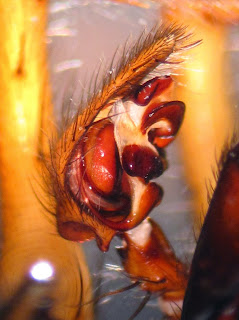 Anyone who is serious about identifying spiders will not be able to avoid journal articles and books filled with images not of whole spiders, but their genitalia. Figuring out which end is up and exactly which parts the text is describing is a lot like solving a puzzle. It can be quite rewarding. Heck, just look at all the fun I’m having. 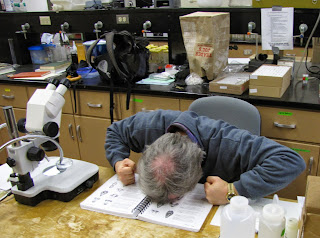