I am still learning the very basics of taking images of insects, like using a flash even when it doesn’t look like I need to. Therefore, I have only one respectable image of a live specimen of one of my favorite wasps, in the genus Passaloecus. They are predators of aphids, but are themselves pretty small, averaging 6-8 millimeters in body length. 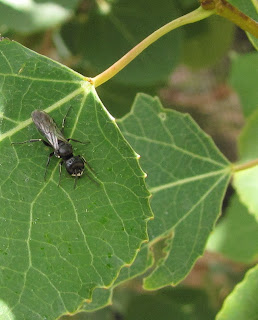 Besides carting aphids back to their nests as food for their larval offspring, the female wasps feed on “honeydew,” the sweet liquid waste product secreted by aphids in copious amounts. Wasps of all kinds eagerly lap up the sticky fluid from the surface of leaves. That is how I was able to get the image above, on the leaf of a young aspen tree at the Cheyenne Mountain Zoo in Colorado Springs on July 13, 2011.

The genus Passaloecus, pronounced Pass-uh-LEE-kus, is in the wasp family Crabronidae, subfamily Pemphredoninae. There are approximately sixteen species of Passaloecus in North America, collectively found across the entire continent. While they are small and relatively non-descript black insects, I find I can recognize them fairly easily by their white or ivory jaws.

These are solitary wasps that you can actively attract to your yard by providing artificial nests for them. They nest in pre-existing beetle borings, and/or hollow stems and twigs, and vacant galls which they partition into a linear series of cells. As their habitat gets converted to subdivisions and dead, standing trees are preemptively felled to avoid lawsuits, these wasps face a real estate shortage. Simply drilling holes about 3/16th of an inch in diameter and to a depth of four inches or so into a wooden block, and placing the block in a sheltered situation well off the ground, you can provide housing for these beneficial bugs.

The nest tunnel is divided into cells with partitions usually made of plant or tree resin. Each cell is provisioned with a number of paralyzed or dead aphids (from six to over sixty according to the literature) and an egg laid on one of those victims. The female wasp may sting an aphid victim, or crush it to death in her jaws, before taking it back to the nest.

Nests of Passaloecus ithacae may contain six to twelve cells each (Krombein, 1967). There are two generations annually, at least in Erie County, New York. Nests of this and other species of Passaloecus are subject to parasitism from the cuckoo wasp Omalus aeneus and the ichneumon wasps Poemenia albipes and P. americana.

We tend to think of lady beetles and lacewings as the prime predators impacting aphid populations, but Passaloecus and related genera of wasps clearly have an effect as well. Perhaps we need to re-think our assumptions and expand our natural allies in pest control to include wasps (Corbet & Backhouse, 1975).