Note: This post originally appeared on Sunday, November 6, but I pulled it in the wake of what turned out to be mostly a misunderstanding. After careful deliberation I am resurrecting the story. I think it is instructional in terms of how problems like this are resolved. I normally do not charge a fee for a simple identification, but this was an exceptional case involving a corporation with much to lose without intervention.

This past Wednesday, November 2, I was presented with a unique opportunity to solve an arthropod mystery for a corporate client. A friend in state government sent me a message on Facebook that morning asking myself and another colleague who we would recommend for identifying spider specimens for a company in an Atlantic coast state. I wrote back that the inquiring party could send specimens to me, but that I would charge a modest fee for my expertise. My government friend thought that seemed reasonable and put me in touch with the company representative.

Later that morning I received a phone call from the Director of Regulatory Compliance for the company suffering from a “spider infestation” in a recent shipment of merchandise from overseas. He decided he would overnight specimens to me for examination.

The next morning, the company rep e-mailed me with two images of the spiders in question. I was pleasantly surprised by the detail in those pictures: 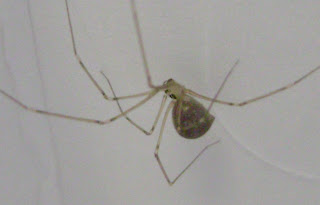 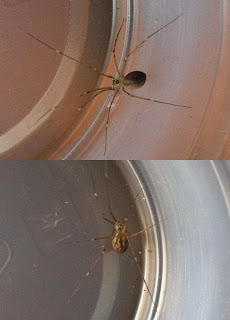 It was clear to me from the images that the spiders were some kind of “cellar spider” in the family Pholcidae, but I could not conclude what genus, let alone species, without putting actual specimens under a microscope. At least I could tell him that the arachnids were nothing considered to be dangerously venomous according to current scientific understanding. Time was of the essence and I hoped that my reply to his e-mail might be sufficient.

I received a message from FedEx with a tracking number for the package, and discovered that I would not receive the shipment until Friday morning. Meanwhile, I did not hear back from my company contact.

Indeed, I heard a knock on my door around 10:00 AM on October 4, and there was the FedEx delivery person with a box for me. Interestingly, he seemed quite eager to part with the parcel…. 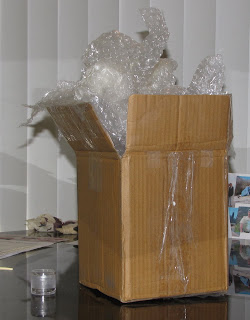 I was amused to find that inside this rather large box was a great quantity of bubble-wrap and a teeny-tiny little vial with a single spider inside. I believe the spider was actually alive when it was packed up, though it was deceased when it arrived. It was still limber and in no way compromised in its anatomical integrity.

I gently placed the creature into a glass petri dish and under my microscope. It was immediately apparent that I had an immature specimen, which would make identification more difficult than it would be with an adult specimen. Still, I broke out my “bible,” the Spiders of North America: an identification manual, turning to the family Pholcidae. The key to genera was sufficient enough for me to conclude that the spider belonged to the genus Pholcus: eight eyes, not six; no pit or groove in the carapace. 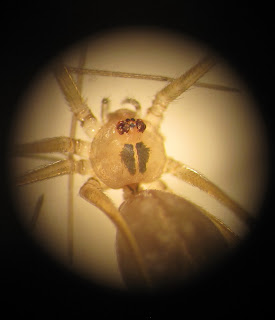 Up until recently, it would have been safe to extrapolate to the species P. phalangioides, the “Long-bodied Cellar Spider,” a very abundant and widespread species. However, I learned from my arachnologist colleague that another species of Pholcus, P. manueli, is expanding its range in the United States. Further, there are evidently a number of undescribed species in the genus.

I called the company representative today with the verified identification.