It is thanks to the book Big Game Hunting in the City Parks that I learned as a child of the “Ant-queen Kidnapper” wasps in the genus Aphilanthops. The captivating account by author Howard G. Smith of one of the female wasps hunting and transporting her prey was just too amazing to believe. Turns out it is a true story, just seldom witnessed. 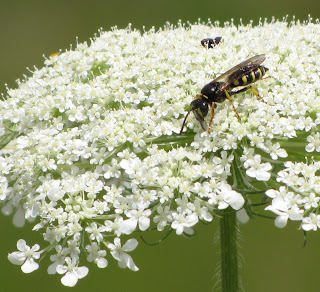 The genus Aphilanthops, in the family Crabronidae and subfamily Philanthinae, occurs only in North America, including Mexico. There are four species, and at least two of them prey on on the winged queens of ants in the genus Formica. They can easily be mistaken for beewolf wasps in the genus Philanthus, but the inner eye margins of Aphilanthops are straight, not emarginated (notched) as they are in beewolves.

You are most likely to encounter the adult wasps as they drink nectar from flowers. The specimen of A. frigidus shown here was spotted in South Deerfield, Massachusetts in the late morning of July 19, 2009. This species ranges across much of the continent from Nova Scotia to British Columbia, and south along the major mountain ranges to the Carolinas, New Mexico and Arizona, and central California (mostly along the coast).

How the relationship between these wasps and their prey evolved is beyond me, but timing is truly everything in this case. The adult female wasp must be ready to take advantage of the short window in which ant colonies swarm. Ant colonies liberate males and new queens typically only once each year. Several ant nests must do this simultaneously to facilitate exchanges in genetic material and thus prevent inbreeding. So, the ant-queen kidnappers don’t have much time to apprehend their victims. Maybe only one day. 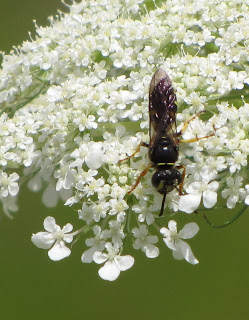 Each female Aphilanthops frigidus excavates her own nest burrow, usually in flat or gently sloping sandy soil. Several wasps usually nest in close proximity to one another, but whether they are actively competing for prey from the same ant nests is not obvious. The burrow descends underground at about a forty-five degree angle and terminates in a “waiting room” at 12-25 centimeters below the surface. Up to four ant queen victims are stored in the cell while the wasp constructs additional cells that will host her offspring. These “brood cells” may be 23-45 centimeters underground. Two to three ants are stored in each brood cell, a single egg laid on one of the victims. The cell is then plugged, and the wasp then addresses the next cell. Just how many brood cells are typical of a single nest is unknown. Once finished provisioning all the cells, the was fills in the burrow entrance with additional soil.

Accounts of attacks on the ant queens vary. Howard Smith reports that ant queens are attacked almost immediately upon emerging from the nest. Other observations conclude that the ants are attacked upon landing after their nuptial flights. At some point, the wasps detach the wings of their victims before storing them. The ants are flown back to the nest threshold where they are laid while the wasp inspects the interior of the burrow, then re-emerges to drag the ant down the tunnel by an antenna. 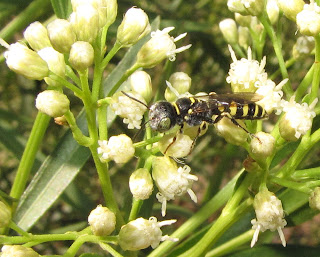 There are no observations of any species other than A. frigidus, so there is a lot to be learned in the future. The most common species I found in Arizona was A. hispidus (image above and below), which is abundant on the blossoms of Seepwillow (Baccharis salicifolia) in August and September. A. frigidus is active mostly from late June to mid-August, at least in New York state where Howard E. Evans studied that species.

Ant-queen kidnappers are not immune from their own villains, principally the “satellite flies” in the family Sarcophagidae. Senotainia trilineata is a confirmed parasite that lays its larvae (yes, the female fly “larviposits”) on the ant victims during their transport to the wasp’s burrow. Metopia leucocephala and Euaraba tergata are also prime suspects in nest failures, as they have been observed loitering in the vicinity of nest aggregations.

Consider doing your own “stake-out” at any wasp nest. Make a video if you are able. Chances are you can add to our scientific knowledge, if not make pioneering discoveries about prey and parasite relationships, seasonality, and other natural history. 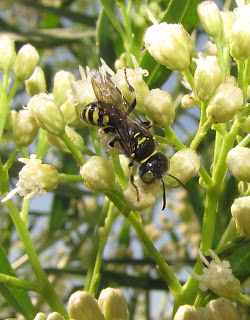