You don’t have to see a Bowl and Doily Spider, Frontinella communis, to recognize it immediately. The name says it all. Its web looks exactly like a bowl atop a “doily,” or saucer. It may be the most recognizable web outside of an orb web. 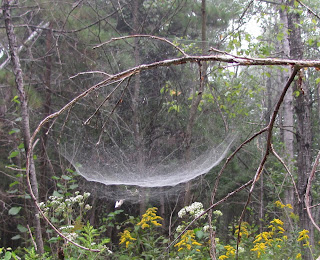 The Bowl and Doily spider is also one of the most common and widespread spiders in North America. The spider itself is not terribly impressive, mature females measuring only 3-4 millimeters in body length, and males slightly smaller. They are handsomely and boldly marked with black and white stripes on the abdomen, a brown cephalothorax, and brownish legs. 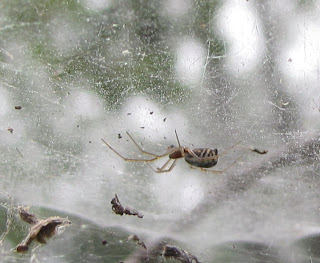 The webs are only a few inches across, and usually well off the ground, stretched between twigs, suspended from fences, and other objects. The spider hangs upside down on the bottom of the “bowl,” presumably awaiting prey to literally “drop in” for dinner. A tangled scaffold of silk lines suspends the bowl, and insects are likely to hit one of the threads and be caught by the upturned sheet below. At least one reference asserts that the spider pulls its prey through the bottom of the “bowl” and then retires to the “doily” to dine.

Another species in this genus, F. huachuca, is known from Arizona. I am wondering if the specimen I imaged in the Chiricahua Mountains at Onion Saddle (picture below) belongs to that species.

Bowl and Doily spiders are not only common, but locally abundant. Find one web and you will likely find dozens of others in close proximity. This may help facilitate mating. Males can be seen sharing the webs of females in late summer and fall. 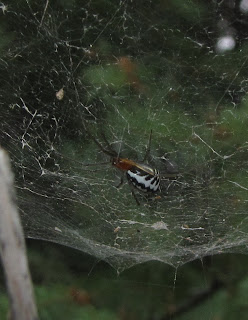 Look for this species at forest edges and in pine woodlands especially, though it is just as likely to turn up in your yard, garden, or orchard. Note that earlier references treat the species as Frontinella pyramitela.