One of the most conspicuous wasps in the Sonoran Desert is the paper wasp Polistes flavus. This is a large wasp that frequents the same narrow belt as saguaro cacti, seldom being encountered at lower or higher elevations. Its large size, and almost entirely bright yellow color helps to separate this species from every other paper wasp in the region. 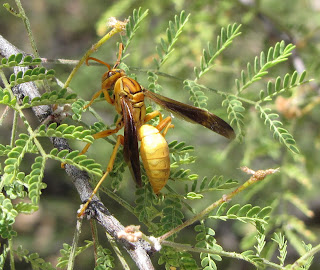 Little is known about P. flavus despite its relative, if seemingly localized, abundance. I have seen nests on only a handful of occasions, and they were all placed under the eaves of buildings. Unfortunately, those observations were made before I started taking digital images. I do recall that the nests were large, if only because the paper cells needed to accommodate these wasps have to be correspondingly large. Fortunately, my good friend Margarethe Brummermann did manage an image or two, one of which is shown below. 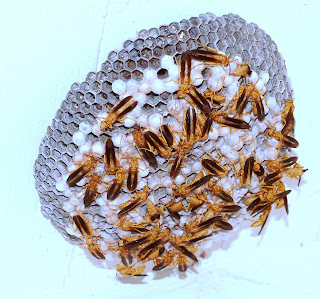 You are most likely to see these wasps in one of three situations: at water, at flowers, and perching on prominent vegetation. Worker females often congregate around receding waters of the intermittent streams characteristic of the Sonoran Desert. They may even land on the water, sprawling across the surface film and drinking deeply. They will visit swimming pools when natural sources are not available. Many other species of desert Polistes and Mischocyttarus will exhibit the same behavior. They all need water to manufacture saliva to mix with wood fibers to create the paper used in building their nests. 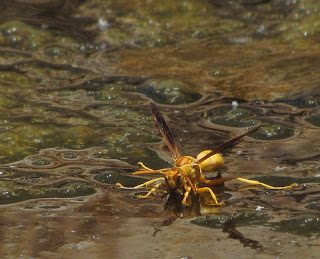 Paper wasps attack caterpillars and other insects to take back to the nest to feed the growing larvae, but the adult wasps need carbs, not protein. Consequently, paper wasps make use of flower nectar and “honeydew” from aphid colonies. Look for Polistes flavus on the blossoms of Seep Willow (Baccharis salicifolia) and, to a lesser degree, Desert Broom (Baccharis sarothroides). The wasp in the image below is on a Seep Willow. 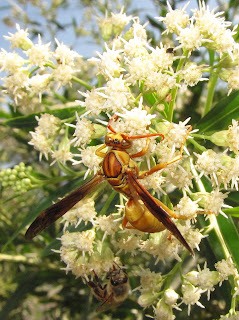 Male paper wasps are often even larger than the females and therefore even more obvious and intimidating. This is especially true when they engage in territorial behavior, perching on prominent twigs or branches along the edges of dry riverbeds and other flyways. From these outposts the males scan for passing females and rival males. They will also chase away other insects, then return to their perch or another perch close by. Males do not have stingers, but are powerful enough to back up their threats. 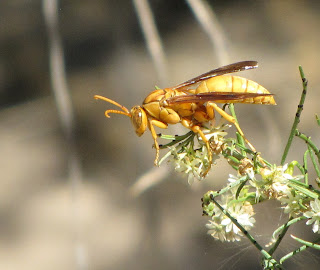 How do you tell a male paper wasp from a female? Males have longer antennae, dramatically hooked at the tip, and their faces are more “square” than those of females. Males tend to have very pale faces, too. Females have shorter antennae, not as prominently hooked, and triangular faces that are usually darker. 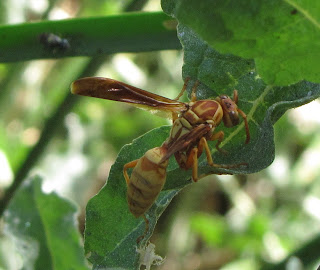 Look for P. flavus in Arizona, as well as southern California, Nevada, Utah, New Mexico, and western Texas. Males can easily overwinter in milder parts of that range, though they are normally more common in autumn as colonies prepare to suspend activities for the colder months.