The members of the wasp family Pompilidae are known as “spider wasps” because the adult females hunt spiders as food for their larval offspring. The elegant little species Caliadurgus hyalinatus is no exception. I found it to be quite common in Cincinnati, Ohio when I lived there and collected insects. It was like finding an old friend when my girlfriend Heidi Genter pointed out this specimen on goldenrod at Cape May Point State Park in New Jersey on October 18, 2010. 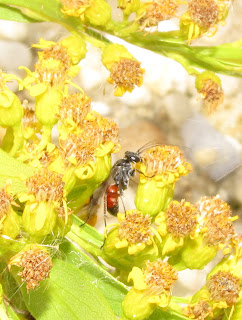 This wasp was formerly known as Calicurgus hyalinatus. Henry Townes, in his monograph Nearctic Wasps of the Subfamilies Pepsinae and Ceropalinae separated the species into four subspecies. Collectively, they range over most of the eastern U.S. and and adjacent Canada, west to Washington state, the Dakotas, and Kansas, south to Georgia and Louisiana with sparse records in Texas, New Mexico, and Arizona. This is also a holarctic species, found in Europe as well.

The famed French entomologist Jean Henri Fabre documented his observations of the species in Europe in More Hunting Wasp. Here in the U.S., Howard E. Evans and Frank E. Kurczewski have contributed to our understanding of this species in the New World. Information from their papers is presented in the following paragraphs.

C. hyalinatus apparently chooses only orb weavers of the family Araneidae to feed its offspring. Host records include the Starbellied Orb Weaver, Acanthepeira stellata, one of the furrow spiders, Larinoides patagiatus, the Humpbacked Orb Weaver, Eustala anastera, the Marbled Orb Weaver, Araneus marmoreus, and a species of Neoscona. The prey was an immature spider in every instance, not surprising given that this small spider wasp could not overpower mature orb weavers, many of which are quite large. The wasp must sting the spider into paralysis to facilitate its “cooperation” in being carted off by the wasp to the nest site.

The female wasp grasps her immobilized victim at the base of a leg, and then walks forward with the prey held in front of her. She may also climb a vertical object and fly (or at least glide) from it to achieve greater distance with more minimal effort. Once she arrives in a suitable spot she stashes the spider in a crotch in vegetation near the ground, and begins to excavate a burrow.

The wasp can work quickly in sandy soil, completing her simple burrow in about thirty minutes. She eventually surfaces, grabs her spider, and tows it underground. The tunnel is diagonal, about four centimeters in length, and terminates in a centimeter-long cell about four centimeters below the surface. The spider is left in the cell, on its “stomach,” with a single egg attached. The wasp then fill in the entrance to the burrow and begins the process anew. 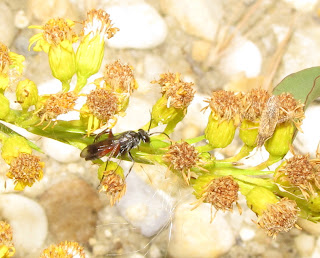 Caliadurgus hyalinatus is not easily confused with any other spider wasp in North America. Females have clear wings with a dark spot on each front wing, a bicolored abdomen, and bicolored hind legs. The hind tibia has a noticeable row of teeth along the upper edge.

Sources: Evans, Howard E. and Carl M. Yoshimoto. 1962. “The Ecology and Nesting Behavior of the Pompilidae (Hymenoptera) of the Northeastern United States,” Miscellaneous Publications of the Entomological Society of America 3(3): 67-119.
Kurczewski, Frank E. and Edmund J. 1968. “Host Records for Some North American Pompilidae (Hymenoptera) With a Discussion of Factors in Prey Selection,” Journal of the Kansas Entomological Society 41: 1-33.