One thing about spiders: You don’t have to stray far from your home to find them. There is perhaps no better example of this than the Common House Spider, Parasteatoda tepidariorum. This species is so inextricably tied to human habitations that it is seldom found “in the wild.” It also owes most of its cosmopolitan geographic distribution to our global commerce in plants and other products. 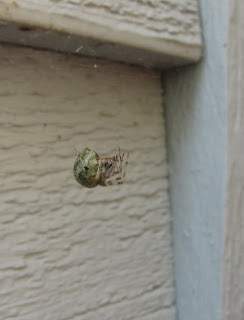 Indeed, it is suspected that while the Common House Spider was first described from specimens collected in Germany, the species probably has its origins in South America where its closest allies reside (Edwards, 2001).

The species was initially assigned the name Theridion tepidariorum by Karl Ludwig Koch in 1841, but U.S. scientist A. F. Archer transferred it into his newly created genus Parasteatoda in 1946. Herbert W. Levi, a Harvard University arachnologist, then placed it in the genus Achaearanea in 1955. The current placement is back in Parasteatoda, where it is one of two species in that genus in North America, 46 species total in the world (Howe, 2012). Depending on the reference you consult, tepidariorum could be in either Parasteatoda or Achaearanea.

The pinball path of scientific nomenclature is almost matched by the number of aliases the species has in the English language: Common House Spider; American House Spider; Domestic Spider; Common Gray House Spider (in Myanmar and Pakistan).

The Common House Spider is a member of the family Theridiidae, collectively known as “cobweb weavers” or “comb-footed spiders.” Most possess a series of barbed spines on the last segment of the fourth leg. The spines help to “comb” silk from the spinnerets. The webs are large, three-dimensional structures that seem haphazard and tangled. Abandoned webs collect dust and appear as the classic “cobwebs” of scary movies.

The webs are very effective traps, however, and while flying insects can be intercepted by the irregular network of threads in the body of the web, the lines that anchor the web to the ground, or lowermost substrate, are the real traplines. Studded with sticky blobs of liquid silk, they adhere to passing ground-dwelling insects, other spiders, or even small vertebrates, holding them fast. The spider then hoists its victim into the body of the web where the spider swaths it in additional silk and renders the prey immobile. A bite is then administered and the venom acts to both paralyze or kill the prey and begin the digestive process from the inside out. 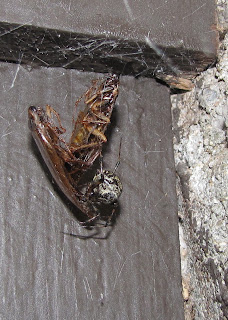 Parasteatoda tepidariorum is not considered to be dangerously venomous to people or pets, but it is frequently misidentified as the Brown Widow. Both spiders are in the family Theridiidae, build similar webs, are roughly the same size, and very similar in coloration. Indeed, I have found both species living virtually side-by-side in Redondo Beach, California. Note that the Brown Widow has a red or orange hourglass marking on the underside of the abdomen. The Common House Spider lacks this distinguishing feature.

Mature females of P. tepidariorum measure 5-8 millimeters in body length. Males average 4 millimeters. Males may share the webs of females as shown in the image below. The male is the slightly smaller, darker individual on the right. Females can live more than a year, and many individuals may occupy a relatively small area, their webs nearly contiguous. That does not mean they are peaceable, however. One that strays into its neighbor’s web may end up as dinner. 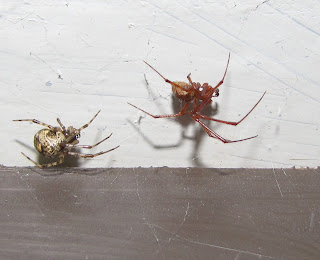 Mated females produce numerous egg sacs from late spring through late summer. The tan, papery, pear-shaped sacs may contain from 100 to more than 600 eggs each. They are familiar objects in the web, and easily identify the species.

Look for the webs of this spider in a variety of places: Under the eaves of buildings, in rock retaining walls, window wells, and tree holes. I recall finding a population of about six specimens thriving between panes in a storm window in western Massachusetts. There they fed on stray insects like the unfortunate Multicolored Asian Lady Beetle wrapped up in the image below. 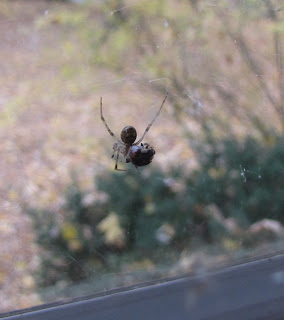 I will bet you can find your own Common House Spiders today. Go take a walk around your home and see for yourself.