It really isn’t quite spring here on the Front Range, but neither is it winter, at least not lately. The high temperature for Tuesday, March 6 was 69°F, albeit windy. Walking down the Homestead Trail in Colorado Springs at midday I was amazed by how many spiders were out and about as well.

A surprising number of spider species overwinter as adults or immature, forsaking the cozy shelter of an egg sac in which to endure the harsh, cold extremes. Among them are running crab spiders (family Philodromidae, image below), crab spiders (Thomisidae), wolf spiders (Lycosidae), and jumping spiders (Salticidae). 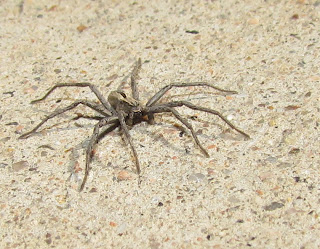 Most of these arachnids are ground-dwellers, so presumably they ensconce themselves in debris such as leaf litter, or tuck themselves into the base of grass tussocks. Even a blanket of snow helps insulate spiders from colder air temperatures and chilly winds.

Spider bodies also contain glycerol, a chemical compound that helps reduce the freezing point of their blood, by about one degree Centigrade (Celsius). Certain proteins in spider blood (hemolymph) apparently reduce the freezing threat even more, up to 20°C. Spiders of temperate climates that overwinter in a passive state tend to be much more cold-hardy than those that are winter-active, like some wolf spiders in the genus Pardosa.

Spiders fall into different categories depending on their reproductive cycle. “Eurychronous” species take a long time to reach maturity, and so may overwinter as adults or immatures. “Stenochronous” spiders include those that reproduce during spring and summer (overwintering as immatures); those that mate in autumn (with the spiderlings overwintering inside the egg sac); and those spiders that are active during the winter, reproducing at that time. Lastly, “diplochronous” species have two reproductive cycles, one in the spring and one in the fall. Typically, they overwinter as adults. 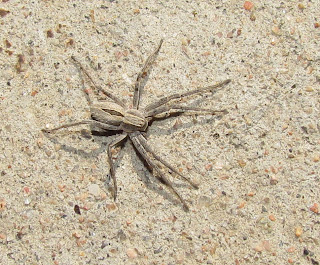 One short stretch of trail also produced two very gravid female crab spiders in the genus Xysticus. “Gravid” means full of eggs. I’ll be looking for them next in silken retreats guarding their egg sacs. Crab spiders are typically ambush hunters, lying in wait for a potential victim to come within reach. Their extra-long first and second pair of legs means that “reach” is considerable, and spines lining the inside of their legs help insure that prey does not escape the spider’s embrace. 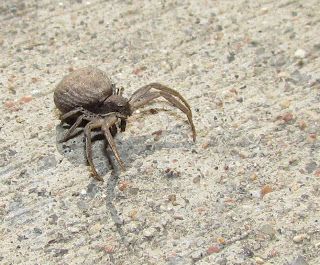 Wolf spiders are also on the move, and a short distance from the crab spiders I spotted a plump adult female heading for cover at the edge of the trail. Fortunately, she stopped just short momentarily, posing for a couple of pictures. My friend and colleague Mandy Howe kindly identified this as a female in the genus Alopecosa. She’ll soon have an egg sac attached to her spinnerets (the spider, not Mandy!). 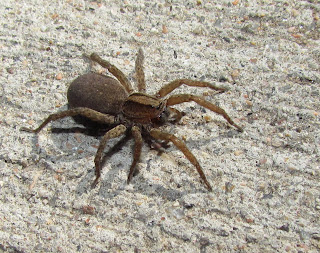 I also found another wolf spider, much smaller and quicker. This is probably an immature in the genus Schizocosa, judging by its color pattern. It bears a superficial resemblance to the Thanatus in that both have stripes on the cephalothorax and a dark “cardiac” mark on the top of the abdomen. This pattern is effective camouflage among grasses and seeds, rendering the animals nearly invisible unless they move. I appreciate the concrete substrate for photography, as one easily loses track of the subject on a more natural surface. 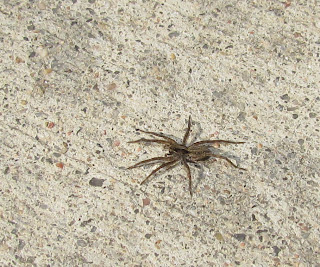 Hiking in Red Rock Canyon Open Space on March 5, a 68°F day, yielded a pair of jumping spiders along the trail. I only managed to get the image below before the tiny arachnid hopped away. I have no idea whether it is an immature or an adult, let alone what genus it might be. 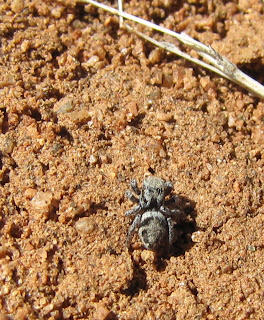 I encourage you to go spider-hunting yourself on the next nice day. It need not be that terribly warm, and I have seen spiders on the surface of the snow before. Look carefully, as some of the most abundant spiders of winter and early spring are the tiniest: dwarf spiders in the subfamily Erigoninae of Linyphiidae. Some juvenile cobweb weavers (Theridiidae) and funnel weavers (Agelenidae) can also be common.