I almost never entertain a guest blog, but I found the following post to the Entomo-l listserv (an international e-mail group of mostly professional entomologists) to be more than worthy of space here.

Dave Green is a beekeeper in rural South Carolina who is equally interested in native bees and other pollinating insects. He has been at this a long time (he goes by ”Old Drone”) and I value his observations and opinions. Here he paints a very hopeful picture of the immediate future of honeybee-dependent agriculture. 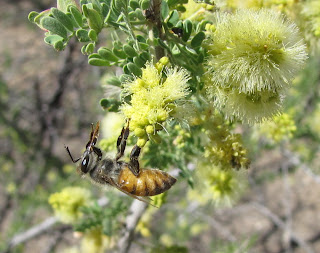 ”This year's swarm season began early with a humungous swarm in mid-February - six weeks ahead of the norm. Investigation shows that none of my hives could have thrown that swarm. So it must have come from a feral hive.

It was a bushel of bees - just like the old swarms we used to see before three parasites and new diseases created hives that could only seem to build to about half the strength of the old timey hives.

My own hives are roaring strong, as well as several hundred commercial hives I looked at before they left for California's almonds last month. They are beautiful bees! It's thrilling to open a hive in late winter to see wall-to-wall bees, even spilling over the edges of the hives.

We've been seeing continuous hype about the honey bees dying off; and I've been saying, "Hold off. Our beekeeping industry is dealing with this. While the possibility is scarey, it isn't happening yet. 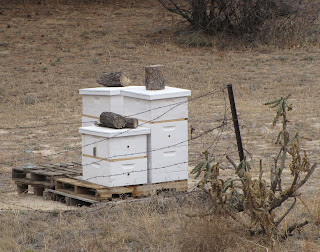 My own observations are confirmed by reports from California, where the almond industry is now engaged in the largest managed annual pollination event in the world - where a million hives from all over the USA come to that state to ensure one of the country's most nutrition-packed and valuable crops.

An article in the Los Angeles Times tells about Paramount, the world's biggest almond grower, with 47,000 acres under cultivation.

’Almonds are our primary crop and the most critical because they bloom for a short period; it's early in the season and we must have bees to pollinate,’ said Paramount President Joe Macilvaine.

‘Lots of things can reduce almond yield — weather conditions, drought, insect infestations,’ Macilvaine said. ‘But if you don't have the bees, you never get to begin.’

Paramont uses managed bees, both Blue Orchard (solitary) bees and honey bees. ‘This season, Paramount contracted with 26 beekeepers to bring in 92,000 hives from as far as Maine, Louisiana, Florida and the Carolinas. The rental expense represents 15% of the company's total almond production cost.’

And the honey bees are looking very good this year!

‘We're looking at the best bees we've seen in five years,’ Paramount staff entomologist Gordon Wardell said. ‘The bees are better because the beekeepers are getting better at managing them.’

In the past, a mild winter could often be a problem. With more winter bloom, bees put in more flight time, eating up honey reserves. Winter flowers are pollen-rich and nectar-poor.

Toward the end of winter, the bees have often used up all the stored honey, and are living on day-to-day nectar. A spell of cold or wet weather can cause mass starvation. Sadly, it's the most powerful hives that have been vulnerable to this. In just a few days of starvation, a strong hive can become weak or even dead.

Beekeepers have become much better guardians against starvation - and indeed are much more aware of all the nutrional needs of the bees. The commercial bees I looked at have been well fed with both carbohydrates and pollen/protein since mid-winter.

But there is another side to the story.

Many times in my career, I've seen bees that looked beautiful - in the spring. A mild winter's pollen-rich flowers help them clear out all the old contaminated pollens.

But then I've watched them dwindle and turn poor as the pesticide season comes into swing. When the spraying begins - the bees start taking hits. Sometimes this is noticeable, sometimes colonies are even killed. But most of the damage is seen in weak hives that are simply struggling to survive. 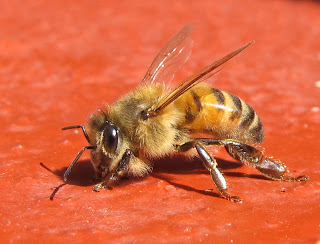 So, while I rejoice at the great start to the season, I'll be watching to see if this is a trend, or the same old story I've seen so many times.

We all need to be watching. When this is seen in managed bees, what is going on with wild bees that are not being observed?

Note: Images here are property of Eric R. Eaton
Posted by Bug Eric at 9:07 AM