Walking the dog the other day (February 26, 2012), I happened upon a small caterpillar slowly crossing the sidewalk in my Colorado Springs neighborhood. It was not a cold day, but not that warm, either. The high for the day was 46 Fahrenheit. Oh, they are out today, too (current temp 49 F at 3:50 PM). Looking more closely, I discovered there were dozens of other caterpillars, all roaming seemingly aimlessly. 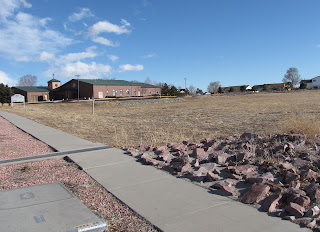 The stretch of sidewalk passed along the edge of a large, open field, so that offered some clues as to what the caterpillars might be. I suspected they were “cutworms” of some kind because I knew that these owlet moths (family Noctuidae) overwinter as larvae. What surprised me was that the caterpillars were clearly not mature. They were of varying sizes, but still not big enough to be on the verge of pupating.

A little bit of internet digging (“Googling”), quickly produced the most obvious suspect: the Army Cutworm, Euxoa auxiliaries. I also recognized the adult moth as something I had seen under the eave of my apartment building last October (see image below). This common “miller” moth of the western U.S. is an overwhelmingly abundant, but its life cycle is quite unique. 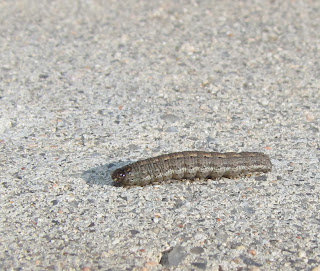 Colorado Springs is very much a military town, so it seems appropriate that the “Army Cutworm” is so common here. Fortunately, the roving bands of caterpillars are not armed with anything more menacing than their tiny mandibles. Not that they cannot do widespread damage anyway. They don’t call them “cutworms” for nothing. The young caterpillars chew through the stems of young, tender plants. They can also eat slow-growing plants right down to the soil. Generalist feeders, the larvae find nearly any vegetation fair game. This species is a notorious pest of virtually every field crop from alfalfa (below) and wheat to barley, oats, potato, and sugarbeets. Cereal grasses are especially vulnerable, but damage is often spotty in a given field. They seem to prefer broad-leaved weeds otherwise, nibbling on the edges of leaves or chewing holes right through them. 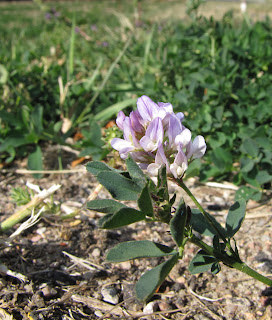 Ironically, while the caterpillars surface and stroll on sunny winter days, they feed mostly at night and on overcast days in the fall and spring. When disturbed they coil into a tight “C” shape until danger passes.

Thankfully, the Army Cutworm is not without its enemies. Chief among them are parasitic wasps. Research has shown that the braconid wasps Meteorus leviventris, and Apanteles griffin are among the parasites of caterpillars in Oklahoma alfalfa fields(Soteres, et al., 1984).

Many of the adult moths, which emerge in late spring and early summer, escape the scorching midsummer heat by migrating to high elevations. There in the mountains they aestivate, gathering by the thousands under boulders in rockslides, or even inside mountain cabins. They do venture out at night to sip flower nectar. Amazingly, they are a critical portion in the diet of Grizzly Bears in parts of Montana and Wyoming, at times when other food is scarce. The insects are loaded with fat and protein and the bears merely turn over rocks and lick them off. 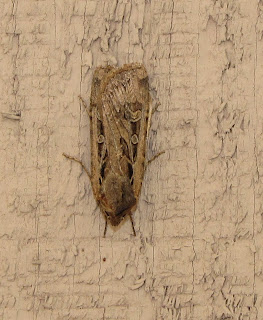 The moths are capable of incredible endurance; and they are not completely without defense. Laboratory experiments involving tethered moths fed with sugar water showed many individuals capable of flying more than 50 miles at a time. One flew for 23 hours at a nearly constant speed of 5.8 miles per hour, achieving the equivalent of 133 miles. They can hear approaching bats with the aid of a tympanic organ in the thorax, taking appropriate evasive action to avoid predation by these flying mammals. Resting moths, when disturbed, spray a liquid substance from the rectum that probably startles a potential predator, allowing the moth to take flight (Eisner & Eisner, 1992).

Moths that survive the bears and other predators return to the lowland plains to reproduce, females laying eggs in late summer and early autumn. Eggs are deposited on bare soil, especially in cultivated or overgrazed conditions. Hatching of the eggs is triggered by rains.

The Army Cutworm ranges from the Northwest Territories and Alberta south through Washington, Oregon, and Montana to Mexico, east to Minnesota, Nebraska, and Oklahoma. Scattered records include northern Michigan, Indiana, Missouri, Texas, and Florida. Their abundance can vary greatly from year to year depending mostly on weather (Cranshaw, 2011).

I am looking forward to seeing whether my neighborhood crop of caterpillars will translate into a bumper year for adult moths this spring. I would like to see a diversity of species at my porch light, however. 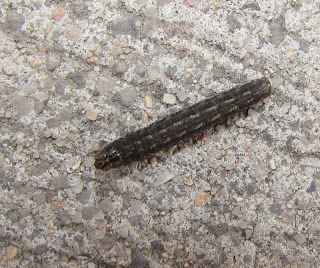