Do you want to see a lynx? You don’t even have to go to the zoo. Chances are, in your own backyard, you can find one. Ok, maybe not the cat, but its namesake arachnid, the lynx spider (family Oxyopidae). I remember a book from my childhood called The Tall Grass Zoo, by Winifred Lubell. The lynx spider would have fit in perfectly. The Striped Lynx Spider, Oxyopes salticus, is a particularly handsome species. 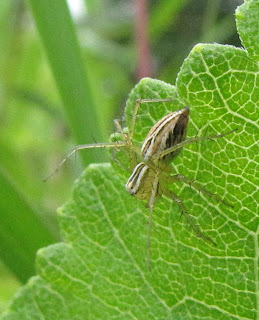 Lynx spiders do in fact get their name from their cat-like styles of hunting. They either wait patiently in ambush, or actively stalk and pounce. Most are diminutive in size. Mature females of the Striped Lynx Spider are only 5.7-6.7 millimeters in body length, males 4-4.5 millimeters. The legspan is roughly 20 millimeters.

They might be mistaken for wolf spiders or jumping spiders at first glance, but note that their lanky, slender legs are all armed with long spines. The high “forehead” and eye arrangement of lynx spiders also set them apart from similar spiders.

Oxyopes salticus occurs throughout the United States and south to South America. It seems to favor fields dominated by brome grasses, rather than shortgrass prairies (Fitch, 1963). I found it to be common in moist, tall grass meadows in the forest preserves of the greater Chicago area of Illinois. Apparently, the species is scarce or absent in the Rocky Mountain states and Great Basin.

Each female fastens her egg sac to stems of grasses with a minimal web of threads, then guards the brood until the spiderlings hatch. Immature spiders apparently overwinter, reaching adulthood in late spring or early summer. Males resemble the female shown here, but the abdomen of males is covered in reflective scales that give the animal an iridescent appearance. 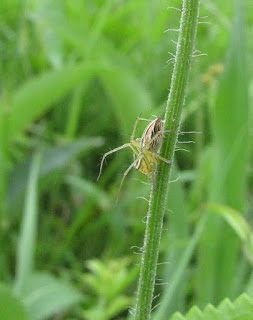 The sheer abundance of the Striped Lynx Spider in grassy habitats has made the species the focus of natural biocontrol of pest insects in agricultural systems, too. Known prey includes such pests as the Tarnished Plant Bug (Lygus lineolaris), Rapid Plant Bug (Adelphocoris rapidus), Cotton Fleahopper (Pseudatomoscilis seriatus), Tobacco Budworm (Heliothis virescens), and Cotton Bollworm (Helicoverpa armigera), so the potential impact on cotton plantations alone would seem promising. One study (Lockley and Young, 1987) conducted in cotton fields in Mississippi revealed that the Tarnished Plant Bug was a favorite prey item. Mosquitoes (Aedes sp.) were also killed, along with plenty of other prey species from several insect orders. Interestingly, there were no observed instances of cannibalism, or even predation on any other kind of spider. That is remarkable, since most spiders won’t pass up opportunities for eight-legged meals. 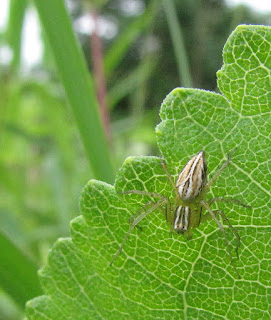 Special thanks to John Balaban for taking me into the Miami Woods Forest Preserve in Morton Grove, Illinois on June 22, 2011, where I found the specimen shown in these images. The forest preserve system around Chicago is a real urban wilderness treasure.