Birds have nothing on insects when it comes to being colorful. One of the most outstanding examples of this is the Candystriped Leafhopper, Graphocephala coccinea. It also goes by the names “Red-banded Leafhopper” and “Scarlet-and-Green Leafhopper.” There are two subspecies, G. c. coccinea being found only in coastal areas along the Atlantic seaboard; and the slightly larger G. c. quadrivittata, found inland. 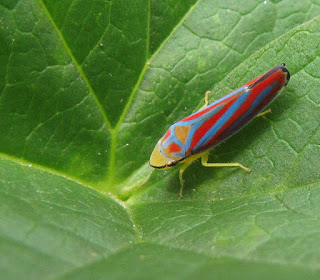 It might help to clarify the higher classification of this insect. When I was first learning entomology in the 1970s and 1980s, leafhoppers, spittlebugs, aphids, cicadas, treehoppers, scale insects, and related families were placed in the order Homoptera. More recent studies have resulted in a reclassification in which the “Homoptera” are now split into two suborders: Auchenorrhyncha for “hoppers” and cicadas, and Sternorrhyncha for aphids, mealybugs, scale insects, and their relatives. The traditional true bugs like assassin bugs and squash bugs comprise the third suborder, Heteroptera. All of these suborders are now under the Hemiptera.

Leafhoppers are in the family Cicadellidae, and are easily recognized by the double row of spines on the tibia (“shin” segment) of the long hind leg. Leafhoppers at rest cock their hind legs so they can leap away from danger at a moment’s notice. 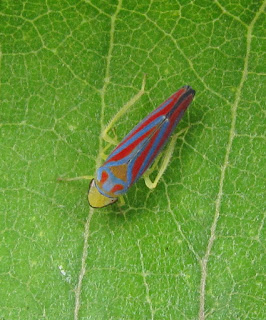 Most leafhoppers are alert, and react quickly to the approach of a person by jumping and flying, or simply dodging around the other side of a leaf or stem. Getting a picture of one is often a frustrating and often futile exercise, but worth pursuing just the same. The diversity of cicadellids is mind-boggling.

Most leafhoppers are pretty small, and the Candystriped Leafhopper is actually one of the larger ones, varying from 5.7-8.4 millimeters from “nose” to wingtip. Females are slightly larger than males.

This is a widespread insect found from the Rockies eastward in the U.S. and Canada; and south to Panama. 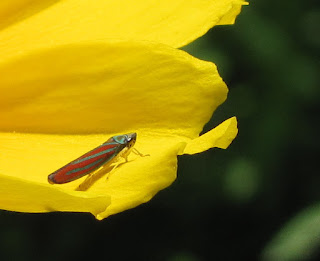 Adults and nymphs feed on plant sap by tapping into foliage and stems with piercing-sucking mouthparts. This diet requires the extraction of great quantities of xylem fluids and the secretion of copious amounts of waste, often expelled from the anus of the insect with great force. One specimen was observed excreting one droplet per second for two minutes (Berenbaum, 1989). Shooting your excretions as far away from you as possible helps eliminate clues that predators and parasites use to track you down.

Feeding activity can also result in the transmission of diseases to plants. Pierce’s Disease, a bacterial infection, is thought to be passed to plants by the Candystriped Leafhopper. The disease can kill grapevines and other woody plants. For this reason, the leafhopper is sometimes considered an agricultural pest.

There is usually only one generation of Graphocephala coccinea each year in the northern part of its range, but potentially two in southern climates. The winter is spent in the egg stage. Eggs are inserted in between layers of leaf tissue by the adult females, with the aid of her blade-like ovipositor. Oviposition results in mechanical injury to the leaf, but may also introduce diseases into the host plant. The nymphs that hatch from the eggs molt five times before reaching adulthood. 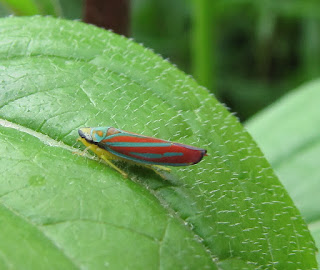 The Candystriped Leafhopper is a generalist feeder, likely to turn up on almost any plant in your yard, garden, or in “the wild.” One reference to the species in Ohio suggests it is frequently associated with ferns (Osborn, 1928), but it is known from cranberries, rhododendron, azalea, laurel, and forsythia, to name but a few other host plants.

Several other members of the genus Graphocephala resemble the Candystriped Leafhopper, and there is great variation between individuals of each species. It pays to consult sources like Bugguide.net to learn the differences. I’ll also share information about some of these lookalikes in future “True Bug Tuesday” posts. 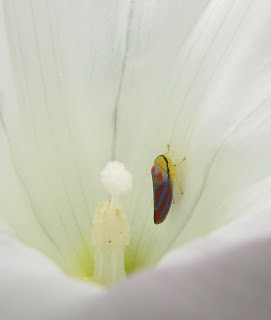