I do not select stories for this blog based on maximum weirdness, they just turn out that way. Take for example the strange case of wasps in the family Orussidae. For starters, they are not often seen in the forests they inhabit; and they are easily mistaken for carpenter ants at first glance. 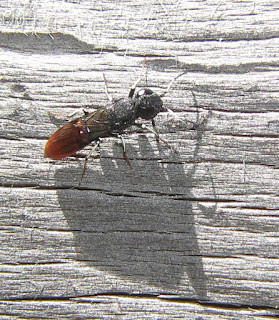 There are only 75 species known, in sixteen genera, for the entire world. Nine species, in four genera, occur in North America north of Mexico.

What makes these wasps truly unique is their history of defying proper classification within the order Hymenoptera. Let us start with the fact that evidence points to a parasitic lifestyle in the larval stage. Ok, so they must be related to Braconidae and Ichneumonidae. Nope. Anatomical features of adult orussids are much more similar to horntails and sawflies. No way! Way! At one point, two scientists tried to solve the dilemma by erecting an entirely new suborder, the Idiogastra, just for the Orussidae. Until recently, many entomologists lumped the Orussidae as an aberrant family within the suborder Symphyta, making them the most advanced of that group, and the most primitive of parasitic wasps.

Today, the family is placed in its own superfamily, Orussoidea, in the suborder Apocrita, the umbrella group for all parasitic and parasitoid Hymenoptera (Vilhelmsen, 2003). 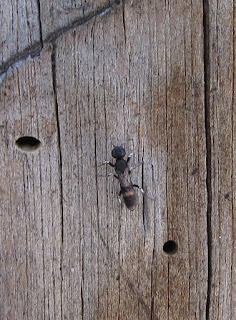 Adult orussids are most often found on logs and dead, standing trees in those sections where the bark has been stripped off. Solid, but sun-bleached wood seems to be favored, and the female wasps crawl and dart across the surface in search of the tunnels of wood-boring insects. Each female detects a larval host through “vibrational sounding,” much like a bat hunts moths at night. She taps her antennae on the surface of the wood, and apparently receives the reverberating “echoes” through a subgenual organ inside each front tibia (the “shin” joint of the leg) (Broad & Quicke, 2000). Indeed, the tips of her antennae are thickened and club-like; and the tips of the front tibiae have thin cuticle concealing the vibrational receptors.

It is assumed that orussids are general parasitoids on various wood-boring insects including horntails, longhorned beetles, and jewel beetles. Most confirmed records in North America have been for jewel beetles (family Buprestidae). The female wasp usually accesses the host grub by backing into an exit hole from which another host beetle had already emerged. She may reach a grub with her ovipositor, which while coiled within her thoracic and abdominal cavities, can be more than twice the length of her body (Vilhemsen, et al., 2001).

The larva that hatches from the extremely long, slender egg is probably not entirely immobile, being equipped with a row of backward-curving spines on all dorsal thoracid and abdominal segments. The spines probably help it inch its way down tunnels to reach a host. Once it finds a host grub, the orussid larva attaches itself as an external parasite. 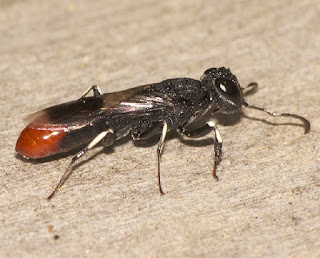 Look for adult orussids in both coniferous and deciduous forests, especially along the edges of meadows or where there are other sunny openings in the canopy. The wasps not only pace rapidly back and forth over a log, changing direction abruptly, but they can also jump.

Our four species in the genus Orussus are the ones you are most likely to see, if you don’t assume they are ants. Dark bands on the otherwise clear wings help disguise them as carpenter ants when the wings are folded over their back. Note the very globular head, with antennae inserted just above the mouth. There are teeth or tubercles on the top of the head. 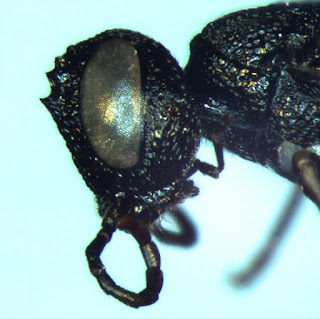 Our understanding of these insects, their geographic distribution, and behavior, are still sparse, so your observations can be key. Take a look at these images by Stephen Hart and these by Rollin Coville for inspiration.