Forest edges are a great place to look for wasps. Male wasps may perch on leaves to defend territories and look for passing females. Female wasps often hunt for prey among foliage, flowers, and stems. Both genders may pause to groom and rest on sunlit leaves. I was lucky enough to catch a rarely-seen spider wasp, Dipogon calipterus, grooming herself on a leaf at the edge of a wooded area near Bloomington, Indiana on June 20 of this year. 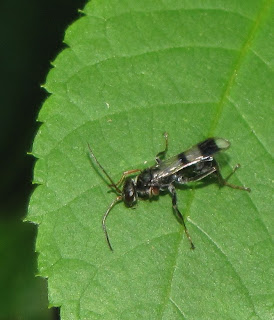 Dipogon spider wasps are mostly forest-dwellers that hunt for spider prey on tree trunks. Most species have dark bands on the wings, which have the effect of making them look a lot like ants. Considering that many predators dislike ants, it is an effective disguise. Add to that the fact that there is frequently a good deal of ant traffic going up and down any given tree bole, and it is no wonder these wasps are rarely observed.

The distribution of Dipogon calipterus is scattered according to the three recognized subspecies. The one depicted here is D. calipterus calipterus, and it ranges from Massachusetts to North Carolina, Indiana, and Illinois, though it is important to note that our knowledge of the geographic distribution of most insect species is incomplete. D. calipterus duplicatus occurs in Georgia and Florida, and D. calipterus nubifer ranges from southern California to Panama. Slight differences in color and pattern seem to be the factors used in segregating the subspecies. 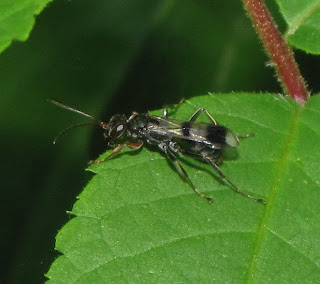 Females of Dipogon rarely, if ever, visit flowers for nectar, but are among the few wasps that will sometimes kill prey specifically to feed themselves rather than their offspring (or they feed on the spider before using it to provision a nest). Dipogon are probably opportunists, attacking whatever spiders they encounter while searching tree trunks, but the collective prey records for the genus are rich in crab spiders (family Thomisidae, especially the genus Xysticus). Other spiders known to be prey include jumping spiders (Salticidae) and ground spiders (Gnaphosidae). There is at least one record of a hacklemesh weaver, genus Amaurobius, as prey for D. calipterus calipterus. 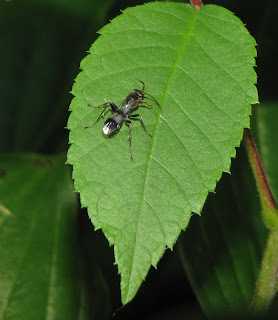 Prey is stung into deep paralysis, or perhaps killed outright, by the female wasp. She carries her victim by grabbing the spinnerets at the tip of the abdomen and walking sideways or backwards, dragging the limp spider in the process.

It is suspected that the female wasp finds a suitable nesting site before she begins hunting. Nests are in typically in pre-existing, tubular cavities such as the abandoned tunnels of wood-boring beetles, or the soft pith in dead or broken plant stems such as sumac. Pre-drilled wood nest blocks put out for solitary bees may be used by these wasps. The linear cavity is divided into cells. After a spider is stored in the first, bottom-most cell, the wasp lays an egg on it and then builds a curtain of mud and/or other material that serves as the ceiling of that cell and the floor of the next cell.

The conglomerate nature of the cell partitions and closing plug is rather unique and helpful in identifying the nests of these wasps. Besides mud, particles of leaves, insect body parts, and even caterpillar frass (poop) may be incorporated into the nest partitions and closures. The female wasp uses the “beard” of hairs on her maxillary palps to carry such material back to the nest. The hairy palps are the only sure way to identify the genus Dipogon, but they are seldom visible on live specimens in the field. 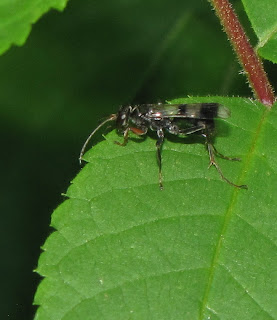 Keep an eye out for these ant-mimicking wasps, even in your own backyard. Yes, it may take looking at a lot of tree trunks, or foliage, but you will eventually be rewarded with at least a glimpse of these unique pompilids.