I am usually excited in the positive sense when insects make headlines, but there are exceptions. It was devastating to learn recently that the Emerald Ash Borer, Agrilus planipennis, has been detected here in Colorado. Why is this discovery such a big deal? It has to do in part with the customary response to this exotic invader in other locations where it has shown up. 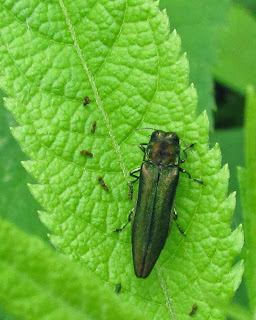 The Colorado Department of Agriculture announced on Friday, September 27, 2013 that the Emerald Ash Borer (EAB) had been discovered in Boulder County earlier in the month. While ash trees are apparently not native to Colorado, they are planted widely as part of the “urban forest” in many cities along the Front Range. Consequently, those trees are vulnerable to this invasive pest.

The reaction of many municipalities to the presence of EAB is the pre-emptive removal of the insect’s host trees. Visions of a wholesale slaughter are going through my mind right now. It is not pretty. It is costly, too, and leaves one less alternative for greenery and shade in what is a pretty bleak landscape on the fringe of the Great Plains. Shade is hard to come by, and there are few tree species that don’t have objectionable side effects. Cottonwoods shed copious amounts of cottony seeds in the spring. Locust trees grow quickly but their falling leaves get sucked into car air filters and find their way into every crack and crevice.

The thing that is really tragic is that the spread of the EAB is pretty much preventable. Various agencies and organizations have tried to get out the message about not moving firewood between states (even between counties), but the plea has either fallen on deaf ears, or not been broadcast loud enough. This is such an important message that it really warrants the Ad Council’s help in airing public service announcements on television and radio. 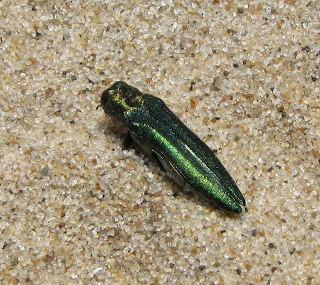 What is the history of this pest, you ask. According to EmeraldAshBorer.info, the Emerald Ash Borer was first discovered in the United States near Detroit, Michigan in 2002. At least, that is when entomologists first recognized it. It could have been present prior to 2002. Authorities surmise that it probably arrived in solid wood packing material originating from its native Asia. In short order the EAB was also found in Ontario, Canada, Ohio, and northern Indiana (by 2004). More were detected in northern Illinois and Maryland in 2006, then western Pennsylvania and West Virginia in 2007, followed by Missouri and Virginia in 2008. Since then it has also turned up in Minnesota, New York, Kentucky, Iowa, Tennessee, Connecticut, Kansas, Massachusetts, New Hampshire, North Carolina, Georgia, and now Colorado.

The life cycle of the beetle makes it difficult to quickly detect and almost impossible to control. The adult beetles typically emerge in mid-late May, with peak numbers in late June. Mated females begin laying eggs within two weeks of their emergence. The larvae hatch in about one to two weeks and begin boring into the inner bark and cambium layer of the host tree, disrupting the transportation of nutrients to the top of the tree. The larvae continue boring from late July to early October, overwintering in a chamber where they will pupate in the early spring. Sometimes the cycle is extended to two years. 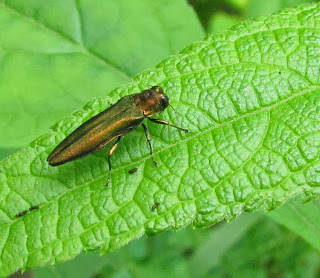 The only symptoms of an EAB infestation outwardly visible are the gradual and subtle thinning of the tree’s canopy, and dying of branches in the uppermost reaches. Small trees can be killed by the beetle in one or two years, whereas larger trees may succumb in 3-4 years. The beetle probably selects stressed or otherwise already weakened trees as preferred hosts, but healthy trees can be attacked, too. The ongoing drought in the Front Range enhances the probability of the EAB becoming a widespread problem very quickly.

Please be on the lookout for the Emerald Ash Borer in your own state, province, or county, whether or not the species has already been detected there. Report your observations to your state department of agriculture, taking them specimens whenever possible. Thank you.