My wife and I recently returned from a road trip to the southern tip of Texas, November 4-ll. One of the spiders we encountered most frequently was the Green Lynx Spider, Peucetia viridans. Several of the specimens we found were females guarding egg sacs. 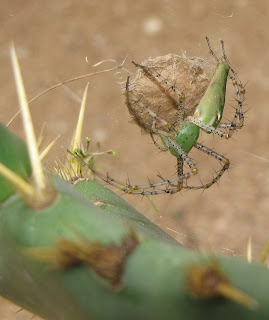 The Green Lynx is atypical of other lynx spiders in the family Oxyopidae in being much, much larger than average. Adult females may reach 26 millimeters, with a legspan of 70 millimeters, though the typical size range is 14-16 millimeters in body length. Males are only slightly smaller. Most specimens are indeed bright green, though many individuals from the southwest U.S. can be yellowish or even brown, the better to blend in with drier vegetation. 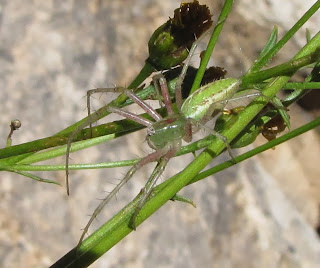 Green Lynx Spiders are agile and can actively pursue prey by running and even jumping, but most of the time you find them sitting motionless among flowers or foliage where they can ambush insects like bees, wasps, and caterpillars. They are also not averse to eating their own kind, as demonstrated in the image below. 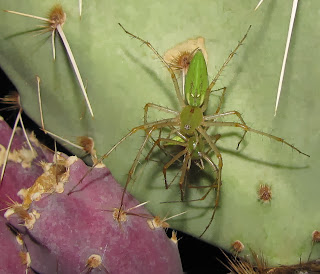 I have seen many individuals, both adults and juveniles, on prickly pear cacti (Opuntia spp.), where they are protected from many of their own predators while supplied with prey that visit the flowers or seek shelter on the shady side of the cactus pads. 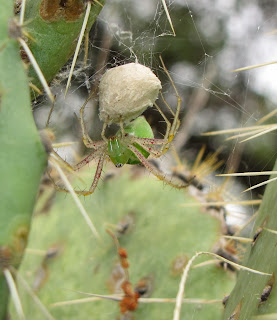 The scientific literature states that Peucetia viridans does not spin a web, but my own observations reveal that females at least construct what could be described as a “nursery web” around the vicinity of their egg sac. The spiderlings that emerge from the sac may add their own silk strands to the web. Images I have of other specimens show a weak network of silken lines that may help anchor the spider to the substrate should it encounter strong, struggling prey. 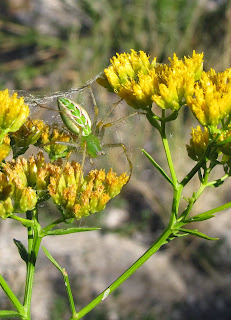 The egg sacs of Green Lynx Spiders have a surprising array of predators, so it is no surprise that the mother spider vigorously protects her offspring from danger. One study showed that the longlegged sac spider Cheiracanthium inclusum is a major threat to egg sacs and the spiderlings that hatch from them. Other predators include acrobat ants (Crematogaster sp.), soldier beetle larvae (Chauliognathus pennsylvanicus), and even grasshoppers and tree crickets (Willey and Adler, 1989). 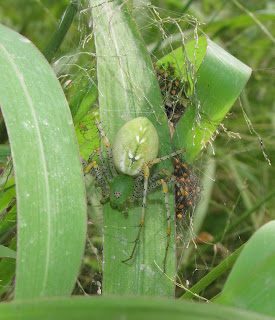 Each egg sac contains between 25 and 600 eggs. The bowl-shaped sac averages 12-25 millimeters in diameter but can be easily embraced by the female’s legs. Females in captivity have produced up to six egg sacs during their lifetime.

Female Green Lynx Spiders are known to spit venom from their fangs to repel perceived attacks by scientists studying them, and probably perform this behavior in the face of threats from other vertebrate predators and/or large invertebrates (Fink, 1984). 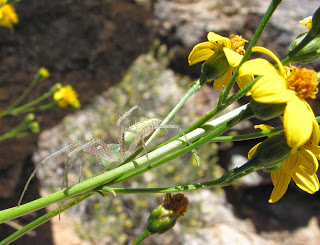 Despite their large size as adults, these are highly cryptic spiders, so look carefully to find them. They seem to prefer fields, forest edges, and arid habitats, from Maryland to Florida and across the southern third of the U.S. to California. There is an additional species in the southwest, P. longipalpis, that can be easily confused with P. viridans. It requires examination of the mature sexual organs to tell them apart.

Enjoy hunting for the Green Lynx. It is a truly beautiful and photogenic arachnid. 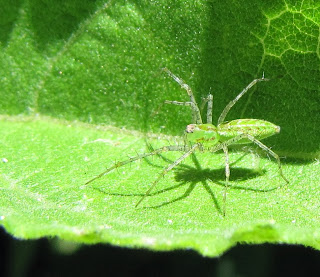