Thanksgiving is an American holiday where we share a big meal with family and friends. Chances are, you might be sharing the leftovers with the Larder Beetle, Dermestes lardarius, as well. 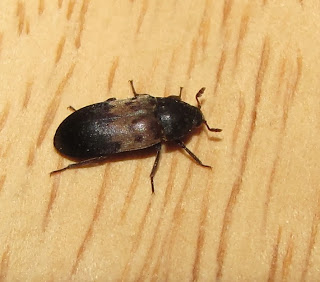 Larder Beetles are members of the family Dermestidae, collectively known as skin beetles and carpet beetles. They feed as larvae and adults on all manner of dried animal products, the larger species enjoying cured meats, dry pet food, furs, taxidermy mounts, even cheeses. Their alias of “Bacon Beetle” gives a clue as to their food preferences. They can also be attracted to the carcasses of dead rodents between walls; or even accumulations of dead insects in light fixtures. I found this Larder Beetle larva crawling out from under our dog’s food bowl earlier this month, probably looking for a place to pupate.

Larvae of Dermestes lardarius average about 12-13 millimeters in length just prior to pupation. They are covered in long hairs like most dermestid larvae, but are distinguished by the pair of hook-like spines on the rear end. 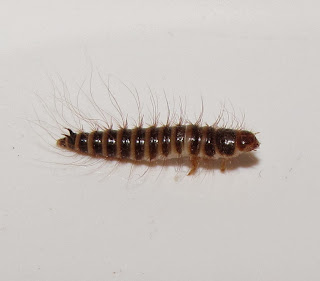 Under optimal conditions, the life cycle from egg to adult can be completed in 40-50 days, but more commonly there is one generation per year. Eggs hatch in an average of less than twelve days after being laid in clutches of 6-8 by the female beetle in a food source. Larvae that eventually become adult male beetles undergo five molts, while female beetles pass through six molts in the larval stage. The insects may spend anywhere from 35-80 days as larvae, probably depending on how easy it is to secure enough food to complete the transition to adulthood. Larvae may wander in search of new food sources, too.

The pupa is enclosed in the last shed larval exoskeleton (“skin”). The larva bores into soft, but relatively solid material such as cork before pupating. The adult insect emerges in about fifteen days.

Adult Larder Beetles are 7-9 millimeters long, and blackish with a broad yellowish band across the elytra (wing covers) as shown. They can fly well. Note the relatively short, clubbed antennae that help distinguish them from other household insects and many other beetles. Adults can be long-lived, sometimes persisting for a year-and-a-half under ideal conditions. The species overwinters in the adult stage, too. 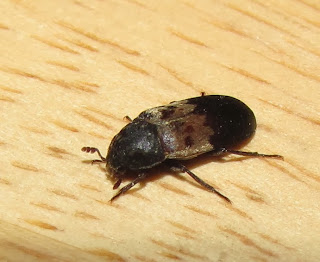 Prior to the age of refrigeration, the Larder Beetle and its cousins were serious competitors for stored food. Today, they are more of a nuisance pest. Prevention is the best way to control them. Store your vulnerable foodstuffs (including dry pet food) in durable plastic, glass, or metal containers with tight-fitting lids. Store furs, wool blankets and garments, and other fibers of animal origin in a cedar chest. Cedar has proven repellent qualities and is quite effective. Forget mothballs (utterly useless) and moth crystals (at least potentially carcinogenic).

I personally find these to be handsome beetles; and I admire their adaptability to exploit our own weaknesses in protecting resources we think are rightfully ours. In this season of giving, sometimes we give by accident. Happy holidays, everyone.