Welcome to “True Bug Tuesday,” an irregularly scheduled celebration of the order Hemiptera. One of the bugs we found on our trip to south Texas earlier this month really stood out for its elegant color pattern. The Spot-sided Coreid, Hypselonotus punctiventris, was especially abundant at the Kenedy County Safety Rest Area on U.S. Highway 77, twenty miles south of Kingsville, Texas. 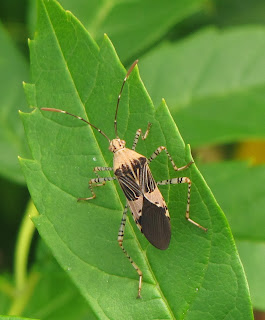 The rest area was landscaped with several trees and shrubs, including Yellow Trumpetbush, Tecoma stans. It was on this flowering legume that we found many specimens of the Spot-sided Coreid. It is found commonly in late October and early November in the vicinity of Austin, Texas on flowering Frostweed, Verbesina virginica.

This species apparently feeds on a variety of flowering plants as an adult. Actual known hosts upon which this insect feeds and grows include Rio Grande Abutilon (Abutilon hypoleucum), and other plants in the mallow family.

In the United States, the Spot-sided Coreid is known only from Arizona and Texas, though there is a recent record from Ashley County, Arkansas, as of April 20, 2008 (Choras III, et al., 2011). The species also occurs in Mexico, Belize, and Guatemala. 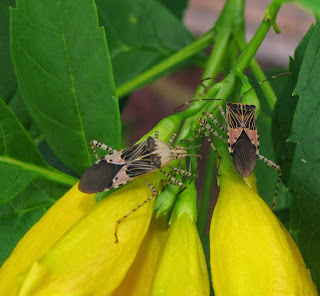 Adults average about 13 millimeters in body length, but their bold wardrobe makes them conspicuous. They can fly well, and when they open their wings they reveal a bright red patch on the dorsal (top) surface of the abdomen. Young nymphs have oversized, thickened antennae, and lack the wings adults have. I did find a final instar nymph (image below) at the Lennox Southmost Preserve, managed by The Nature Conservancy, at the very southern tip of Texas. 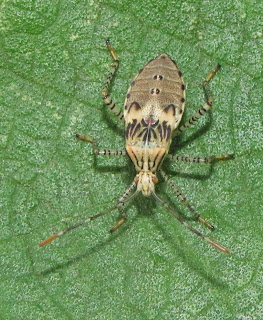 Despite its abundance, the Spot-sided Coreid is rarely, if ever a pest of agriculture or the garden. You are free to observe and admire this handsome insect with no fear it will doom your prize plants! Meanwhile, nearly any observations you make on H. punctiventris could represent new information on this non-pest bug. 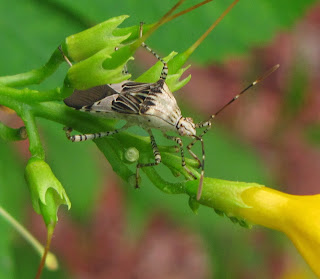