Few insects cause more head-scratching bewilderment or jaw-dropping awe than adult Wheel Bugs, Arilus cristatus. They look like the offspring of a beetle and stegosaurus with that remarkable cog-like crest on the top of their thorax. These strange “dinosaur bugs” are members of the assassin bug family Reduviidae. While they should be welcomed in the garden as predators of pest insects, they should be treated with respect, too. 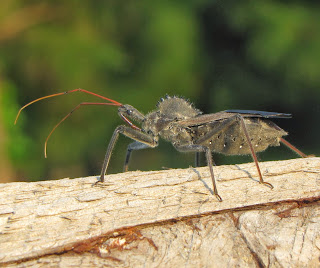 Wheel Bugs begin life looking much like other true bugs because they do not have the big crest until they reach adulthood. Young Wheel Bugs are black with a bright red abdomen. You will likely see them crawling about on foliage individually. Similar true bug nymphs, like leaf-footed bugs (family Coreidae), are usually seen in groups. 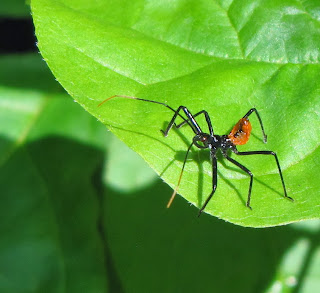 Wheel Bug nymphs go through five instars (the intervals between molts), gradually losing their bright colors and becoming covered in silvery hairs that give them a coarse, grizzled appearance. 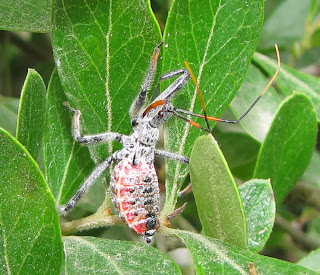 They become larger in size with each molt, and acquire wing pads that will transform into fully functional wings as adult insects. All this time they are stalking other insects as prey, moving in a slow, methodical, deliberate manner that may only amplify the “creepiness” factor for someone prone to fear or dislike insects in general. 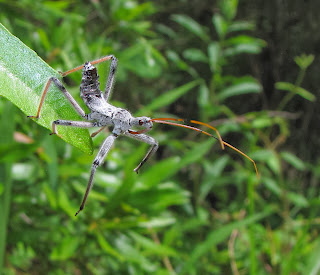 The final transformation from nymph to adult, accomplished in the last molt, is a dramatic one. A freshly-emerged adult Wheel Bug is a stunning pink or orange in color, and that trademark crest is now apparent. Two sets of wings are now fully developed. As its new exoskeleton hardens, the insect becomes darker, becoming gray and/or brown.

All assassin bugs use beak-like mouthparts to pierce their prey, injecting paralyzing venom and digestive enzymes into their victim. The internal tissues of the prey are liquefied by this chemical cocktail, and then withdrawn by the assassin through the same channels in its beak. Wheel Bugs are capable of taking prey larger than themselves, but small beetles and moths are among their favorites.

It is not a good idea to handle Wheel Bugs because they can deliver an excruciating bite in self-defense. They may deploy other behaviors to startle potential attackers, too. Assassin bugs have a groove in their “chest” that is flanked by ridges. Their beak normally rests inside this groove, but if alarmed the bug can bob its head vigorously, raking the tip of the beak across those ridges to make a very audible squeaking sound. 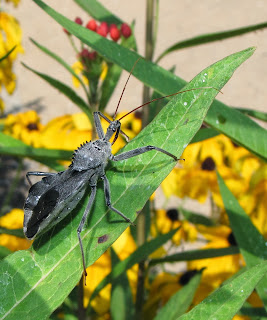 Besides making noise, female Wheel Bugs can evert a pair of stink glands from the tip of the abdomen to repel a predator. The glands are large and bright red, creating quite the visual display as well as a fragrant deterrent.

Arilus cristatus is a large insect, adult males being up to 28 millimeters in body length and females up to 32 millimeters. Females have a wider abdomen than males, when viewed from above.

Adult Wheel Bugs are seen most often in late summer and fall, earlier in more southerly latitudes. The species is found from eastern New Mexico north and east to Kansas, Iowa, southern Michigan, and southern New England. It is perhaps most abundant in the southeast states; it also occurs in Mexico.

Mated female Wheel Bugs lay their eggs in distinctive hexagonal masses. The number of eggs in such a cluster varies from about forty to 180. Look for the egg masses on tree trunks and other vertical surfaces where they will overwinter, protected by a shellac-like coating that insulates them from harsh weather, parasites, and other potential mortality factors. Nymphs hatch the following spring. 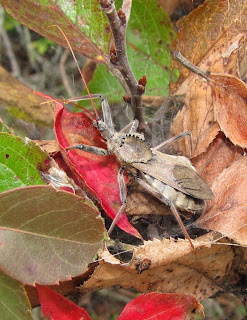 This is one of the “mystery bugs” I am most often asked about. It is so distinctive that even the most minimal description is enough to determine what the person is talking about. I like that people are curious about this species, and appreciate the opportunity to enlighten them about the unique biology of these predators.