Fall is a very colorful season, but it is not just the leaves on the trees that furnish brilliant hues. Take for example the subject of today’s “OrThoptera Thursday,” the Redwinged Grasshopper, Arphia pseudonietana. At rest it is a perfectly bland blackish, grayish, or dark brown insect. In flight, however, it exposes bright red hindwings. Their short aerial forays are often accompanied by loud crackling noises created as the front edge of the hind wing rubs against the posterior margin of the narrow front wing (tegmena). These “crepitation flights” are sometimes more conspicuous in sound than in visual display. 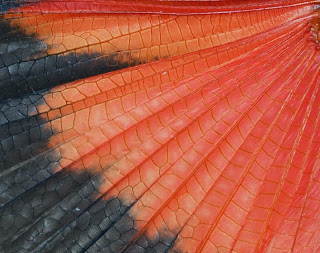 A Redwinged Grasshopper on the ground is nearly impossible to spot. They are usually well-camouflaged, but they also crawl rapidly into tangled grasses upon alighting. So, even if you happen to see where a flying specimen lands, good luck discovering it before it sees you and takes flight again. They are among the most challenging of grasshoppers to photograph because they are so wary and easily spooked. 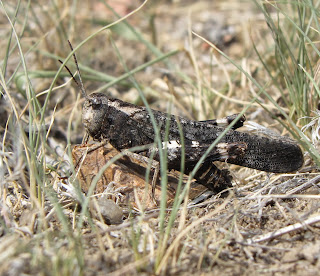 The posterior pair of wings in grasshoppers are used in flight, and they are folded in accordion fashion, like a Japanese fan, when not in use. Those bright flight wings are concealed by the camo-mottled or banded front wings when the insect is on the ground. 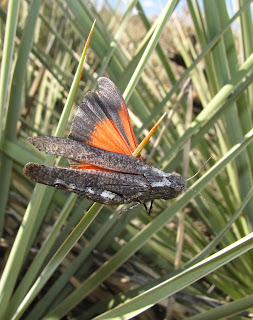 Specimen accidentally impaled itself on a yucca leaf; I extricated it after this image was taken

Arphia pseudonietana is a widespread species in North America. Their distribution has a funnel shape, with a point of origin in central Mexico. The species ranges northwest up through eastern California, Oregon, Washington, and southern British Columbia; and east through Texas, Oklahoma, the northern half of Missouri, northern Illinois, Michigan, and extreme southern Ontario, Canada.

This is a decidedly grassland species that is most abundant in prairie habitats, and savannahs with shrubs and scattered trees. In the northeast U.S., look for it in dry, sandy or gravelly situations; and arid hilltops. Some populations in Minnesota, Wisconsin, and Michigan have bright yellow hindwings instead of the customary red. 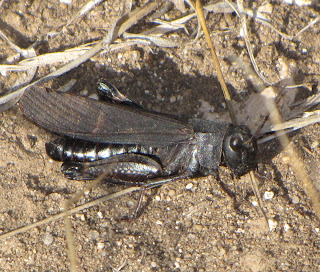 Adults and nymphs feed on grasses and sedges, occasionally doing minor damage to winter wheat in areas where that crop grows adjacent to prairie habitat. It is not considered more than a minor pest to agriculture and rangeland.

The eggs of this species, buried in the soil in a conglomerated “pod,” hatch in mid- to late June. The nymphs take a minimum of 42-56 days to reach adulthood, passing through five instars (the intervals between molts) prior to becoming fully-winged and sexually mature. The adults are large insects ranging from 30-47 millimeters in body length. Females are longer and larger-bodied than males.

Males make display flights with loud crepitations to attract the attention of females. They fly horizontally or nearly vertically to a height of over one meter, slowly fluttering back to the ground. Mated females deposit pods of eggs in the soil, as depicted in the image below. 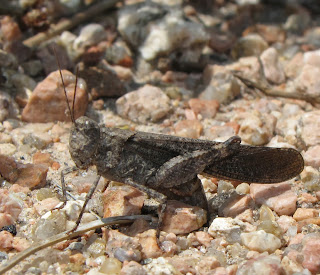 The Redwinged Grasshopper is worth seeking out, if only to see those bright red wings flashing in the sun. Be on the lookout for other species of “bandwinged” grasshoppers, too, named for the dark band across the hindwing of most species that contrasts with the red, yellow, or even blue basal disc.