Happy “Fly Day Friday.” Robber flies in the family Asilidae have to be among the most compelling of all insects, as evidenced by the many professional and amateur entomologists who study them. They are diverse in appearance and behavior, and yet there is still much to be learned about them. 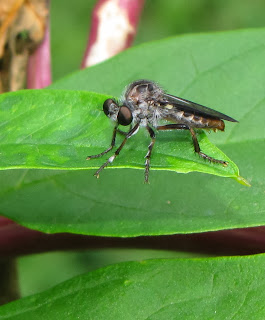 This past August I had occasion to visit southern Ohio, and in several places I found specimens of the species Heteropogon macerinus. They are not terribly large, about 10 millimeters long or so, and fairly drab in appearance as you can see from the images here. They are fairly easy to spot, however, because they tend to frequent forest edges where they habitually perch on the tips of twigs at about eye level.

Robber flies like these remind one of flycatchers in the world of birds. They survey the world from their perch, cocking their head this way and that when an insect passes by. Should a flying bug seem to be a potential meal, the robber fly dashes out, grabs its victim, and returns to its perch to feed.

Robber flies have piercing-sucking mouthparts much like a mosquito, but shorter, stouter, and used to prey on other insects, not to feed on the blood of vertebrates. What is visible to us is the sheath that houses the stylets that do the actual piercing, so while it appears that a robber fly has a thick, knife-like beak, the killing and feeding machinery is virtually hair-like.

Asilids have an uncanny ability to find the weak spots in another insect’s armor, and quickly thrust their mouthparts into those areas. Some species go for the “neck,” stabbing through the thin and flexible exoskeleton that joins the head and thorax. Some are able to drive their stylets into the membranes between abdominal segments; or in the seams between various segments of the thorax as this H. macerinus has apparently done to a winged ant in the image below. 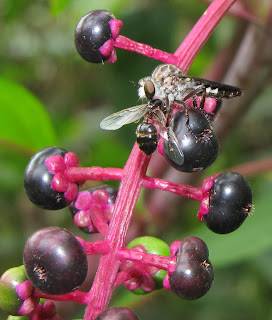 What really got my attention was a courting pair of Heteropogon macerinus that my wife and I spotted at the edge of a cemetery in Lynx, Ohio on August 25, 2013. The tarsi (“feet”) on the front legs of male Heteropogon species are at least slightly decorated with ornamental setae (“hairs”), and he uses these “bracelets” to full advantage. Norm Lavers, on his own robber fly website, describes their behavior most eloquently:

”If you are lucky enough to see the courtship, that will put the identification out of doubt….they all seem to do it the same way. The female makes herself visible by sitting on a twig usually rather high in the air, on the top of a sapling or tall bush. The male hovers before her, his hind legs out wide to the side, perhaps to show off the red coloring. The female responds by throwing up her hind legs (whether that means yes or no I don't know). If the male is allowed to get close enough, he begins stroking her eyeballs with his front claws while he is still hovering, a delicate operation, one presumes. If she likes him, she will eventually let him sit down beside her, where after a while one thing leads to another.” 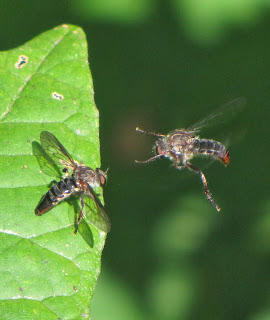 Fortunately, another person in our party remarked that it would be wonderful to have a video of the aerial dance we were watching there in Ohio, and I remembered my camera has video capabilities. Here is the resulting….pixelage? 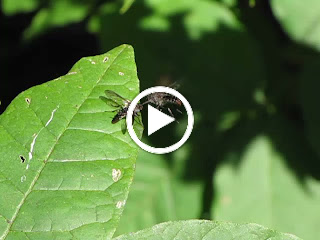 Is it any wonder why entomologists become enamored with asilids? The life history of the majority of species remains a mystery. The larval stage of those few that are known seem to be external parasites of beetle grubs, or the larvae of other insects. Your own observations could yield vital new information as to predator-prey relationships, and/or larval hosts.

I have yet to find any place in North America that does not have a pretty diverse assemblage of robber flies, so I challenge you to go looking, even in your own backyard. I will also bet you are likely to get addicted to these charismatic flies once you find them.