The diversity of shapes in the spider world is amazing. What does the Spinybacked Orbweaver, Gasteracantha cancriformis, remind you of? The genus name translates from the Greek to “belly thorn,” and the species name is Latin for “crab shape.” Indeed, other common names for this species include Crab-like Orbweaver and Crab-like Spiny Orbweaver. It reminds me of one of those medieval mace weapons come to life, or a flesh-and-blood ninja star (shuriken). 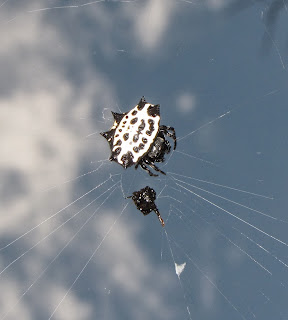 This is no soft-bodied arachnid, either. The exoskeleton of the flattened abdomen is thick and hardened, the spikes protruding from it horn-like and stout. A predator would certainly think twice before swallowing something that prickly.

This unique species is unlikely to be confused with any other spider you will encounter, provided you recognize it as a spider and not a piece of windblown debris that happened to be intercepted by a web. They tend to crouch, with their short legs drawn close to their bodies, so no one could fault a person for dismissing the spider as an inanimate object.

The overwhelming majority of specimens you are likely to see are females. The mature spiders are actually wider than they are long, ranging from about 5-9 millimeters in length, but 10-13 millimeters in width. Contrast those dimensions with the tiny males, which are only 2-3 millimeters in body length, and only slightly wider. He is a little rough around the edges but lacks the big spikes of the female. 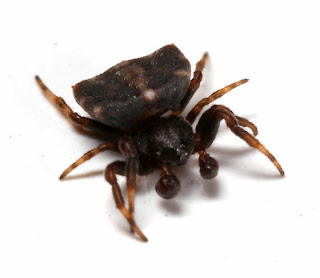 The first one of these I ever saw was at the Hemingway House in Key West, Florida in June, 1978. It had spun a web high in a tree and had I not been on a balcony at the time I never would have noticed it. The snare has a large, open hub where the spider sits, and the spiral is not as tight as in species of Micrathena (which also have spiny bodies). The body of the web can span 30-60 centimeters. 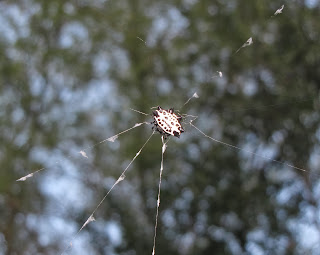 The web is often decorated with little tufts of silk along some of the radii near the hub. It is suspected that these knots of silk serve as warning beacons to birds so that the snare is not destroyed by an avian flying through it. Could they also be lures for potential prey? One theory as to the function of a stabilimentum, the band of silk in many Argiope orb weaver webs, is that the ribbon imitates a flower, reflecting ultraviolet light that pollinating insects cue in on. 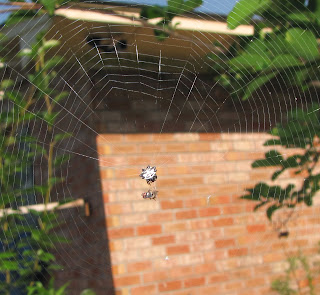 This can be an abundant spider along woodland edges, citrus groves, even gardens, especially in rural townships from the southern United States to Argentina. Look for it as far north as Maryland, Arkansas, and Oklahoma. I have encountered it regularly in Florida and Texas, but it is known as far west as southern California.

G. cancriformis is most common in late fall and early winter, from October through January, at least in Florida. Mated females deposit eggs in sacs that are attached to the underside of leaves. The egg sac is very distinctive, covered in a rather loose net of coarse yellow silk with a line of green silk down the center of the oval structure. 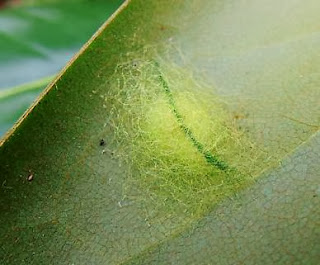 The Spinybacked Orbweaver will always be a species I look forward to seeing anytime I venture into the subtropical southern U.S. Keep a lookout for them in your own travels.