When you think of a cricket, a robust blackish or brownish insect probably comes to mind. Maybe you imagine the classic “cricket on the hearth,” cheerfully “chirp-chirp-chirping” from some concealed location indoors or outside. You might be surprised to learn that crickets in the family Gryllidae come in a variety of forms, with a corresponding diversity in song. The Red-headed Bush Cricket, Phyllopalpus pulchellus, is a delicate, diminutive, and colorful creature with a trilling song. 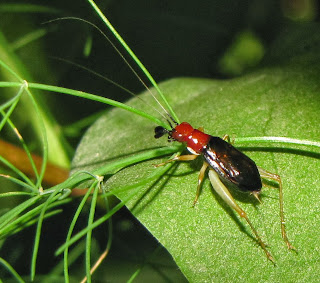 This species is active both day and night, and at first glance may be mistaken for some other kind of insect. Adults are only 7-9 millimeters in body length, and they crawl over foliage well off the ground in contrast to the more lumbering, ground-dwelling field crickets that are more familiar.

Females have unmodified front wings, and a sickle-like ovipositor jutting from the rear of the abdomen. Males have the front wings modified for producing a shockingly loud, high-pitched calling song. His wings are asymmetrical in venation, and the left one with a clear spot in the middle. 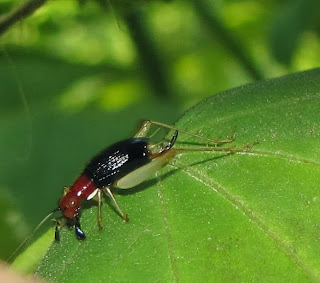 He elevates his front wings to a nearly vertical position, and often selects a “stage” where two leaves come close together. This configuration helps amplify and project his song.

Phyllopalpus pulchellus is also known as the Handsome Trig, and indeed it is sharply-dressed. Both genders are easily recognized by their bright red, black, and yellow color pattern. Their mouthparts include palps, like most other insects with chewing mouthparts, but the terminal segment is conspicuously broadened. It gives them the appearance of having “boxing gloves” that are in constant motion as the insect senses the chemical properties of the surfaces they roam across. 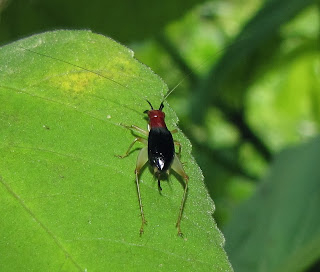 This is a common insect that ranges from southern New England to northern Florida and west to the eastern borders of Kansas, Oklahoma, and Texas. Look for the adults in July, August, and September in low shrubs and bushes.

I have had success finding the Red-headed Bush Cricket simply by scanning various plants, whether the creature is singing or not. It does helps to know what they sound like, though, so take a listen to the digital recording on the ”Singing Insects of North America” website. In my experience, the song is even more shrill than it comes across in the recording. 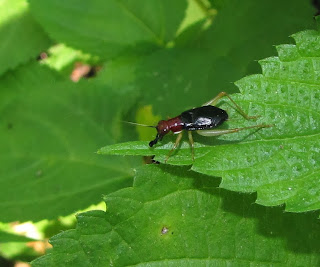