Black and white insects, especially those that are of good size, never fail to attract attention. One of those conspicuous types is the Double-banded Scoliid, Scolia bicincta. These large, hairy wasps are commonly seen on autumn wildflowers like goldenrod (Solidago spp.), thoroughworts (Eupatorium spp.), and milkweed (Asclepias spp.). 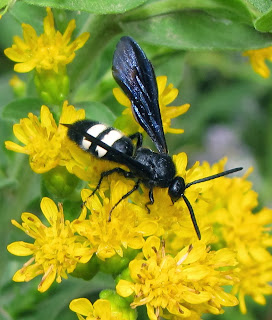 Wasps in the family Scoliidae are easily recognized by their relatively large size, robust hairy bodies, and often blue or violet wings with dense horizontal ridges near the tips. Females have short antennae while males have long antennae. Males also have a “pseudostinger,” sometimes three-pronged, on the last abdominal segment. Females have a true stinger, retracted inside the abdomen when not being deployed.

S. bicincta is named for the two broad, white bands across the front half of the abdomen. The insect is otherwise black with bluish reflections on the wings. Size varies from 15-25 millimeters in body length. The species ranges across the eastern U.S. from southern New England to Nebraska and Kansas, south to Florida and Louisiana.

This wasp is not quite as abundant as its cousin the Blue-winged Wasp, but it is by no means rare. No host records exist for the Double-banded Scoliid, as far as I can fathom, but it is assumed to be parasitic on subterranean scarab beetle grubs.

An adult female wasp somehow divines the presence of a beetle larva underground, digs down to it using her exceptionally spiny legs, and stings the grub into paralysis. She either utilizes the grub’s existing burrow as its tomb, or carries it deeper and fashions a crude cell-like crypt. She then lays a single egg on the grub and abandons it. 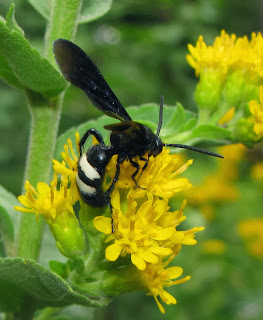 The wasp larva that hatches from the egg feeds as an external parasite for roughly two weeks. When finished, the larva spins a cocoon and overwinters inside. Come spring it forms a pupa, completing its metamorphosis into an adult wasp shortly thereafter. Adult wasps are on the wing from July through September or October, their flight period depending on geographic latitude to at least some degree.

Look for the male wasps flying close to the ground in a lazy figure-eight pattern. They emerge before females and are eager to find a virgin of the opposite gender, even if she has not yet surfaced from her pupal chamber. Males roost for the night either individually or in loose groups, curling themselves around stems or twigs.

Scoliid wasps should be considered beneficial to your yard, lawn, garden, or farm, where they help to keep those pesky “white grubs” under control. Meanwhile, the adult wasps are fairly effective pollinators considering they are flower visitors out for nectar only. Their hairy bodies can accrue a coat of pollen that they then carry to the next flower. 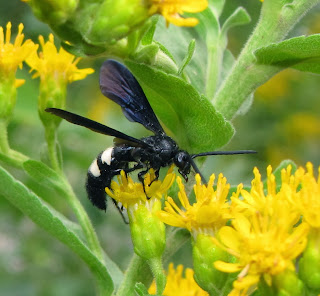