Scale insects are abundant true bugs, but they may be the most overlooked of all insects. Quite frankly, they don’t look anything like insects. The females are nearly or entirely sedentary, and usually covered by a waxy shell or coating secreted by the insect. The overall impression is one of an aberration in the growth of the host plant, or perhaps an insect gall, or a snail or other mollusk. Such is the case with the Striped Pine Scale, Toumeyella pini. 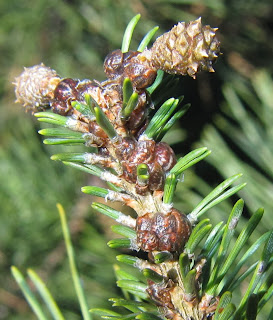 I found the immature female specimens shown here on an ornamental pine in my Colorado Springs neighborhood on November 1, 2011. It is these females that overwinter, their shell-like dorsal surface protecting them from the elements. This was actually one of two species of scales attacking the tree. The much smaller, silky white ovals are pine needle scales in the genus Chionaspis (family Diaspididae).

The Striped Pine Scale is one of eighteen known species in the genus Toumeyella. It is native to the U.S. and Canada where it is considered a pest species. The hosts are pines, mostly two- and three-needle species (needles bundled in twos or threes).

Like other scale insects, aphids, and many other sap-sucking bugs, T. pini secretes copious amounts of a liquid waste product called “honeydew.” This sweet, sticky substance is highly attractive to ants, wasps, bees, and flies. In fact, the presence of a scale insect infestation may first be betrayed by large numbers of yellowjackets swarming over an affected pine tree.

The active stage in the life cycle of the Striped Pine Scale is the youngest nymph stage, known as a “crawler.” Crawlers are very tiny, emerging from the eggs in late May or early June. They may hitchhike to new host trees via insects, birds, mammals, people, or gardening tools and machinery.

Crawlers gravitate toward new growth on a tree, settling in after only a day or two. They molt (shed their exoskeleton), losing their legs and acquiring longer mouthparts. Female crawlers attach to the twigs, while male crawlers settle on the needles. The male scales are much smaller, and more elongate in shape, than the females shown in these images. 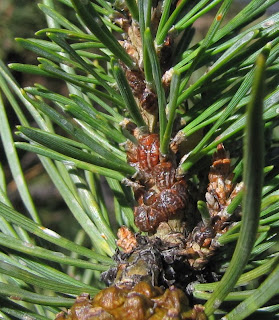 After that first molt, the female insects will not move again. Males mature in late summer, sprouting wings and flying to females. They mate with immature females, and those females overwinter in diapauses (not feeding). There can be more than one generation in the southern reaches of their range, up to three generations per year in Georgia.

In the crawler stage, the Striped Pine Scale is preyed upon by lacewing larvae and lady beetles. The adult female scales are eaten by the moth caterpillar Laetilia coccidivora (family Pyralidae), and both male and female scales are parasitized by the tiny chalcid wasp Coccophagus lycimnia (family Aphelinidae), at least on Loblolly Pine in Georgia (Clarke, et al., 1989). House Finches, Yellow-rumped Warblers, and other birds also feed on these scale insects.

This species ranges widely east of the Rocky Mountains, and is generally more abundant in the northern tier of states. It has only recently reached a problematic status along the Front Range here in Colorado. Infestations of bark-infesting woolly aphids (Pineus spp.) appear to be associated with Striped Pine Scale infestations, perhaps making trees more susceptible to attack.

Scotch Pine and Lodgepole Pine appear to be the most favored hosts for T. pini, but many other pines are subject to infestation as well. Look for the female scales, highly convex and about 6 millimeters across, on the terminal twigs of the host trees. 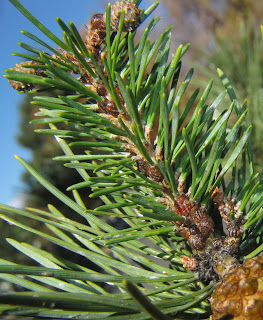