Ever since we decriminalized the sale of marijuana in Colorado, people here seem to think that “stonefly” is a term that describes an insect trapped in a bong. That would be a stoned fly. Anglers know the difference, and right now is the time for “hatches” of spring stoneflies in the family Nemouridae along the Front Range. 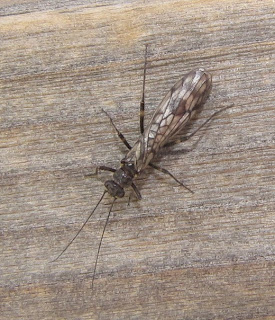 The species I find most commonly probably belong to the genus Zapada, known as “forestflies.” I haven’t bothered to catch any specimens and turn them over. The cervical (“neck”) gills of the larval stage (nymph or naiad) are retained by the adult and are diagnostic. Two sets of branched gills on each side of the body mean it is in the genus Zapada. 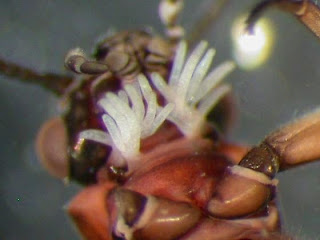 Stoneflies in general are excellent indicators of water quality in streams and rivers because they are more sensitive to pollution, dredging, and other alterations to their habitat than many other aquatic insects. Spring stoneflies, which are also known as “little brown stoneflies,” are tolerant of a moderate amount of pollution and other human disturbance. 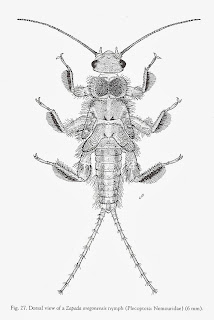 Nymphs of Zapada cling to submerged rocks and other heavy objects in flowing waters. There is one generation per year for the common species Z. cinctipes, meaning it is “univoltine.” Some other species require 2-3 years to complete their life cycle. The nymphs feed on vegetable matter, mostly leaves that fall into the water. Aquatic insects that chew up leaves are known as “shredders.” 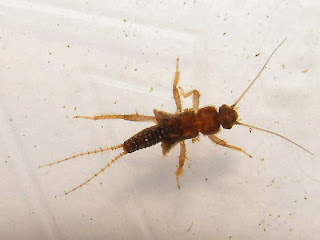 Adult forestflies can begin emerging as early as late February, but most have their peak emergence from mid-March to mid-April. Mature nymphs, and adults, measure only 5-8 millimeters in body length (not including the wings of the adult), so these are not conspicuous insects. Adults are most often seen on bridges or logs that stretch across streams and creeks. They are quite active, running rapidly and flying when startled.

Considering the rich history of mining in the Pikes Peak region, and various chemical spills that have contaminated the few creeks and rivers here in Colorado Springs, I am rather surprised that forestflies continue to prosper. 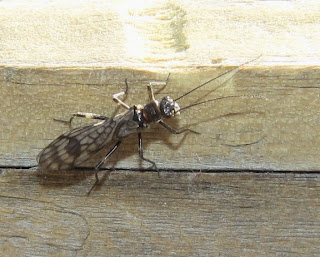