Few spiders are as colorful as those in the genus Sergiolus. Why they are so boldly marked is something of a mystery, though there is suspicion that they may be mimicking velvet ants, wingless wasps in the family Mutillidae that pack a potent sting. Sixteen species of Sergiolus are known north of Mexico. 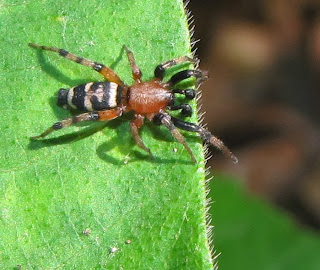 These nomadic arachnids are very agile, at least when fleeing potential danger, and they often prowl through leaf litter, so you may only get a glimpse of one. Be patient, though, and it is likely to reappear. They are also good climbers, so don’t be surprised to find them on foliage, or walls, too.

Sergiolus are medium-sized members of the family Gnaphosidae, females ranging from 6-10 millimeters in body length, males 5.5 to 7 millimeters. They are mostly diurnal (day-active), so are even more conspicuous than the average spider. The obvious, cylindrical spinnerets at the tip of the abdomen are characteristic of all Gnaphosidae, but helps distinguish Sergiolus from colorful spiders in other families. There are other ornate gnaphosids, such as Callilepis, and separating the different genera hinges on subtle distinctions in the genitalia (epigynum of females, pedipalps of males). 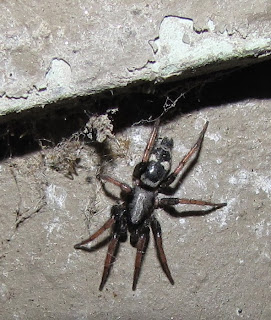 Since there are several species, I am reluctant to assign specific names to the images shown here. One of the more abundant species found from the Nebraska and Oklahoma eastward is S. capulatus, sometimes known as the Variegated Spider. It bears an uncanny resemblance to velvet ants in the genus Timulla, which frequent similar habitats: sun-dappled patches on the floor of deciduous forests. The spider is also found in gardens, meadows, even lawns. 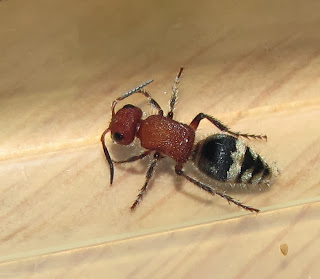 While Sergiolus does not spin webs to snare prey, they do construct retreats in which to molt, guard an egg sac in the case of females, and perhaps to overwinter. They probably live over a year, as adults can be found in almost any season. Obviously, they are most active during the warmer months.

Look for these and other spiders, as well as insects, in sunlit spots in wooded areas. You will be surprised at what shows up if you simply sit and watch. Sergiolus can also be found under stones and other objects in reasonably dry situations. 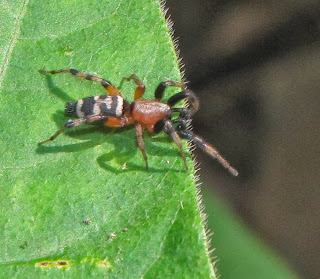 You can keep gnaphosids in captivity with relative ease. Almost any container will do. Provide them with water, as they do not obtain water from prey. I furnish a small wad of cotton soaked in water at least once per week. A small insect can be fed to a spider every other week or so. Spiders are built to withstand surprisingly long periods without food. Remove the prey insect if it has not been consumed within two days. Spiders preparing to molt will not feed and are therefore vulnerable themselves to predation.

Note: Several members of the genus Sergiolus were once placed in the genus Poecilochroa, and older references treat them as such. 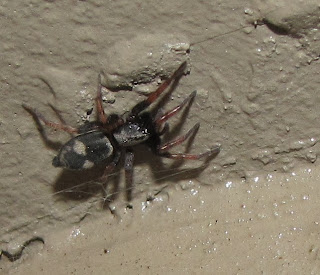