Our most familiar cobweb weavers, like the Common House Spider and black widow, seem most abundant in or around buildings, so it might come as a surprise to learn that many, if not most, members of the family Theridiidae live outdoors in the strictest sense. One of the larger “wild” cobweb spiders is the Candystripe Spider, Enoplognatha ovata. It is also known as the “Polymorphic Spider” because it has several color variations. 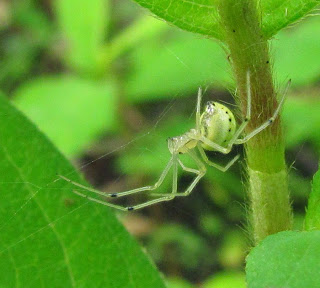 This species is probably native to Eurasia, introduced to North America long ago. It is now a very common spider in New England, the Great Lakes region, and the Pacific states inland to Montana and Utah. They spin their tangled snares in understory vegetation in woodlands, and among wildflowers and herbs in meadows and fields. The spiders usually hide by day under a curled leaf. Females guard a white or bluish egg sac in late summer. 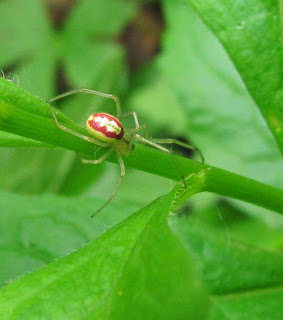 Individual specimens vary from entirely white, cream, or yellow in color with or without parallel rows of black spots on the abdomen, to having paired red stripes down the back, or even a broad central red stripe. Adult females measure 4.3-7 millimeters in body length. Mature males, 3.5-5.2 millimeters, are distinguished from females by their modified pedipalps and the elongated jaws (chelicerae). 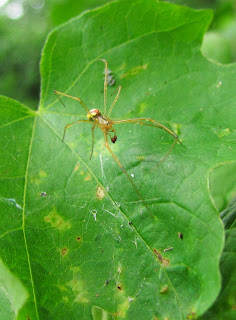 Spiderlings emerge from egg sacs in autumn, and overwinter in leaf litter and other protected niches on the ground. As they grow they are subject to parasitism by larval mites (ironically, mites are also arachnids) of the families Trombidiidae and Erythraeidae (Reillo, 1989).

I vividly recall finding this species commonly during my childhood in Portland, Oregon. Years later I found more during a visit to various forest preserves in suburban Chicago, Illinois. I find it interesting how some species are emblematic of one’s life and interests, be it birds, reptiles, or insects and spiders. 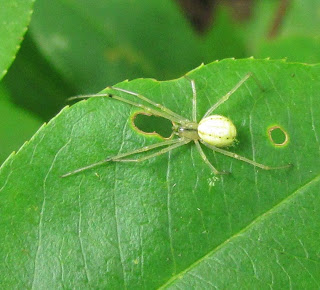