Fashion rules dictate that one cannot where white after Labor Day, but the Spring White butterfly, Pontia sisymbrii, need never worry. These pale insects expire long before that arbitrary deadline. Indeed, these are among the first butterflies of spring here along the Colorado Front Range, often appearing before the official date of the spring equinox. 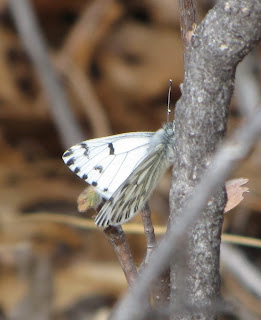 Heidi and I have seen several specimens already this year, on March 9, along the Arkansas River below Pueblo Reservoir. I expect to see them any day now here in Colorado Springs.

These are wary butterflies that perch frequently but startle easily. Approaching one to take its photograph is usually an exercise in futility. Males are known to “hilltop,” flying along the tops of ridges and buttes to intercept females flying up from below. You can also find them in canyon bottoms, the topography funneling females into those areas.

Like most members of the family Pieridae, caterpillars of the Spring White feed on cruciferous plants: mustards and their cousins. Females deposit one egg at a time on the stems and foliage of host plants, especially hedge mustards (Sisymbrium spp.), tansy-mustard (Descurainia spp.), and rock-cresses (Arabis spp.). In some places in northern California, Brewer’s Jewelflower, Streptanthus breweri, produces orange spots that mimic the eggs of the butterfly. The female insect avoids those plants, since caterpillars are known to cannibalize each other when too many are on one plant (Pyle, 2002).

The caterpillars hatch from the eggs in roughly a week and begin feeding in earnest. The larvae progress through five instars (an instar is the interval between molts, first instar being what emerges from the egg), and older caterpillars are quite attractive as you can see in the image below, shot by Aaron Schusteff and borrowed from Bugguide.net 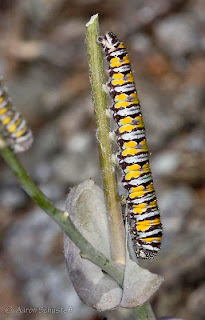 At the end of the fifth instar, the caterpillar graduates to the pupa stage. The chrysalis is described as being mottled brown or black with a granular texture. While the chrysalids of most pierids are each suspended in a “girdle,” a belt-like strand of silk around the midsection and attached to the substrate at two points, the Spring White pupa lacks this feature. It attaches to the surface of the leaf, stem, or other object only at the tail end of its body. Hooks fasten into a tiny pad of silk to secure it firmly. 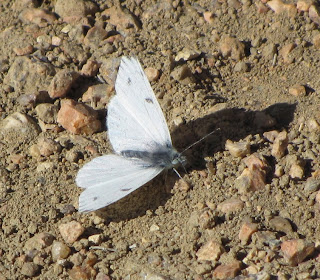 Some specimens have a nearly pure white upper surface

This butterfly ranges over most of the U.S. west of the Rocky Mountains, including the mountains of Arizona and New Mexico, spilling over the divide into extreme western South Dakota and the panhandle of Nebraska. It also occurs in south-central British Columbia. In Oregon and Washington it is found east of the Cascade range (and in the mountains of the Olympic peninsula in Washington).

Look for this species early in the season, from late February on through the end of June. It frequents foothills and higher elevations. It flies earlier than most whites, but pay attention to the dark pattern of veins on the underside of the hind wings to cinch an identification. 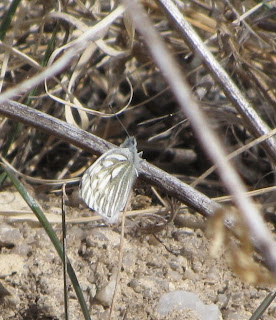 The Spring White may be a more accurate predictor of the arrival of spring than Punxsutawney Phil, the famed groundhog, at least here in the western U.S. Good luck getting the butterfly to pose for a photo opp, though.