You never know where learning the life cycle of an insect will take you; or how it might advance prevention of parasitic diseases on another continent. In this special procrastination edition of “Fly Day Friday,” we take a look at the fascinating fly genus Sepedon in the marsh fly family Sciomyzidae. 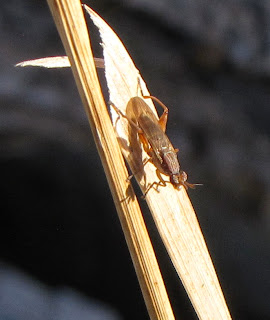 I was reminded of the strange lives of marsh flies when Heidi spotted one while we were walking our dog on an urban trail beside Fountain Creek in south Colorado Springs on February 24 of this year. I was surprised to see a specimen of Sepedon this early in the year, but there it was (image above).

There are twenty species of Sepedon currently recognized in North America (Knutson and Orth, 2001). These species are arranged in “species groups,” based on shared characteristics.

What is truly captivating is not the taxonomy (classification) of these flies, but their life cycle. The larvae of all Sepedon species are predators of aquatic pulmonate snails. These are air-breathing mollusks that have a simple lung in addition to, or instead of, gills.

Killing and eating snails is not without its risks. The fly larvae live just beneath the surface of the water, suspended by water-resistant hairs surrounding their posterior spiracles (breathing holes). The snails attacked are species without an operculum, the hardened plate that can seal the animal firmly inside its shell. So, a predatory fly larva won’t have the door slammed in its face when launching an attack. Still, the maggot can become suffocated by mucous excreted by the snail in self-defense; and the water-repellent hairs on the larva can get enmeshed in snail feces (Maharaj, et al., 1992).

Despite such perils, the fly larvae are efficient predators. Different lab studies have shown the larvae of different species can consume, individually, anywhere from eight to nearly fifty snails. Granted, many victims are very small. Indeed, the successful completion of a Sepedon life cycle depends on the availability of juvenile mollusks as prey for the first and second instars (an instar is the interval between molts). The third (and final) instar larva can take substantially larger snails. 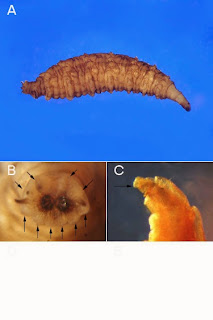 In the tropics, some aquatic snails are hosts of parasites, particularly schistosomes that can affect humans directly, and livestock liver flukes. Consequently, control of these snails is desirable. The possibility of employing snail-killing flies as biocontrol agents has been pursued with some vigor, but the few field trials have yielded mixed results.

Once a larva matures, it pupates. The puparium is capsule-like and boat-shaped, upturned at the posterior end, the better to float amidst organic matter at the margins of ponds or the shores of flowing waters. An adult fly emerges sometime later (a cursory search yielded no duration for the pupal stage).

Male flies have the tibia of the hind leg bowed in shape, and the hind femur swollen and armed with teeth. These features help embrace the female during courtship and mating. The general appearance of both genders is a more-or-less “stretch limo” of the fly world, sleek and slender, with a concave face and jutting antennae.

Mated females deposit small numbers of eggs in masses on emergent vegetation, so look for these insects in swampy areas, along the edges of ponds, and the banks of streams and rivers, even drainage ditches. A water course need not be flowing permanently to host both the flies and their snail prey. The adult flies overwinter, too, which explains how Heidi managed to find one so early this year. 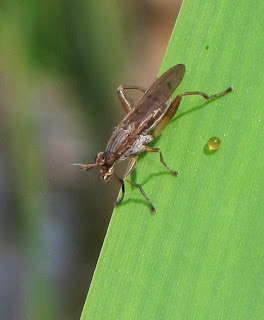