Earlier this year I was fortunate enough to report a species of dragonfly never before seen in Colorado. Last Monday, October 20, I got lucky again, with a Fremont County record for the Black-fronted Forktail, Ischnura denticollis. This is a type of damselfly in the family Coenagrionidae. 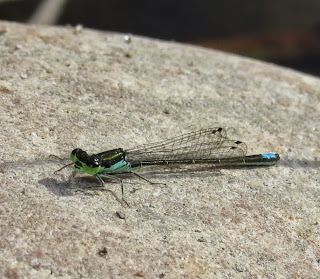 I can only take credit for spotting the insect in the field, along the edge of a backwater pond in John Griffin Regional Park, Cañon City, Colorado. It was clearly a male damselfly, perched on a rock by the shore, with nearby cattails. The area is part of the "Riverwalk" along the Arkansas River. I decided to snap a few pictures, if only because insects in general were few and far between that day. Also, the rock was the steadiest object with the gusty winds that were blowing. Anyway, I didn't think much about the whole encounter, except that I was puzzled by a forktail that did not have the usual requisite blue or green spots (or stripes) on the back of the thorax. Oh, well.

Once we returned home, it was my wife, Heidi, that took it upon herself to look up the diminutive (22-26 mm in body length) creature online and in books we have in our library.

"Hey," she said, "I think that damselfly might be something pretty cool." She had already consulted several resources by this time, and concluded that it was an unusual geographic location, and therefore a potential county record.

I uploaded my own images, cropped them, and posted them on Facebook to group pages where I know dragonfly and damselfly experts lurk. Sure enough, it was determined to be a Black-fronted Forktail, a county record, and an exceptionally late date of observation. 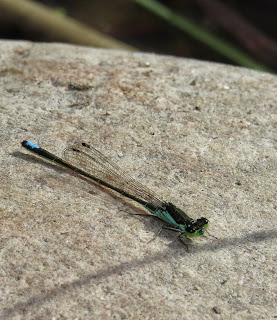 Males of this species are pretty easily identified. Besides lacking pale markings on the dorsum (top) of the thorax, the blue on the abdominal segments 8 and 9 is restricted to a spot on the top, instead of a ring around the entire couple of segments. Unfortunately, females are much more difficult to identify, resembling several other forktails.

The late date is perhaps not too much of a surprise because these are oddly long-lived insects as adults, persisting about six weeks in some instances. At least one specimen was shown to have lived 42 days.

The Black-fronted Forktail is a decidedly western species, ranging from southeast Oregon and southwest Idaho through California, Nevada, western Utah, Arizona, and New Mexico. It does not occur in the Cascade, Sierra Nevada, or Rocky Mountains, but creeps north again into eastern Colorado, on out to west Texas, Oklahoma, and Kansas.

Look for adults on the wing at almost any time of the year in the southerly reaches of this forktail's range, but reliably between about April and October just about anywhere else. They hang out around springs, both hot and cold, ponds with lots of emergent vegetation, and even very slow-moving stretches of streams.