There is no way around it. The most apt description of most tachinid flies is "spiny-butt." The abdomen of a good many members of the family Tachinidae is covered in long, obvious spines. Why? I haven't found an explanation, but that physical characteristic helps one to immediately recognize these flies as something other than a house fly, blow fly, flesh fly, or other similar dipteran. That said, two large tachinid flies are frequently confused with each other: Adejeania and Paradejeania. Here in western North America, these two animals are commonly observed as they take nectar from late summer and fall wildflowers. I, for one, can never remember which one is which. Ok, so one of them has beak-like mouthparts, is slightly smaller than the other, a bit brighter in color, and declines in abundance toward autumn....

Ah, it is Adejeania vexatrix that has these characters! The "beak" is somewhat unusual in the Tachinidae, and it is the elongated palps that form a sheath around the remainder of the mouthparts. This species ranges from British Columbia and Alberta south through California, Arizona, and New Mexico. Adult flies are on the wing in July and August, but in the more southerly reaches of their distribution can be found in September or even October. 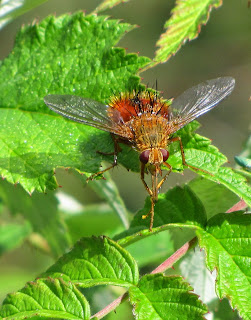 It is known that this fly is a parasite of caterpillars, but the exact host species has yet to be documented. When a caterpillar yields an organism other than the adult moth or butterfly, it can be a real challenge to identify what kind of Lepidoptera it was *supposed* to metamorphose into.

Macromya crocata strongly resembles A. vexatrix, is found in similar forested habitats, but lacks the "beak" of its look-alike. The same information applies to Hystricia abrupta, another common species frequently mistaken for A. vexatrix.

Paradejeania rutilioides is even more robust, and spinier, than the species just discussed. It tends to be a more subdued orange in color, and the adult insect is found most often in August, September, and October (though stragglers can be out in November or even December). Here in Colorado I find this species commonly on flowers of rabbitbrush (Chrysothamnus or Ericameria depending on the botanical authority you consult). 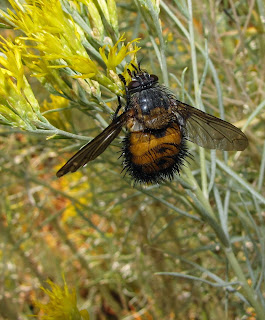 This species goes by the common name of "Spiny Tachinid Fly" or "Hedgehog Fly," the latter epithet coined by fly expert and author Stephen A. Marshall. It has a similar distribution as A. vexatrix, divided geographically into two subspecies, one northern and one southern. The fly is a known parasite of caterpillars of Edwards' Glassy-wing, Hemihyalea edwardsii, a tiger moth in the family Erebidae (subfamily Arctiidae).

Tachinid flies in general are remarkable creatures that are of enormous benefit to us through their parasitic lifestyle. We would surely be overrun with pest caterpillars, stink bugs, and other insects were it not for the ability of tachinids to control pest populations. Further, they are important flower visitors that complement pollinators like bees. 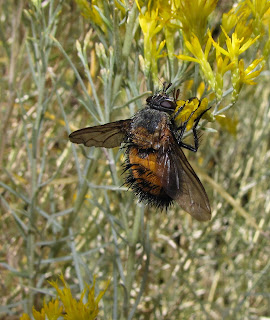