That was my reaction when I learned the identity of a tiny beetle that I found back on October 14. I posted the image you see below to the Facebook group "Friends of Coleoptera at the Natural History Museum [London]" in hopes that someone might recognize it. Michael Geiser, Tommy McElrath, and Jong-Seok Park quickly agreed that it was a corylophid. I had never even heard of the family Corylophidae until then; and the common names "minute hooded beetles" and "minute fungus beetles" didn't ring any bells, either. 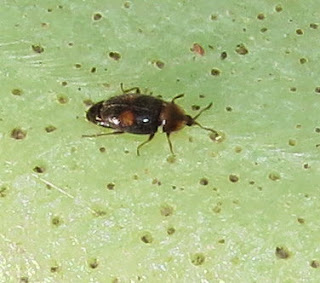 That's how it goes in entomology if you are a generalist with limited knowledge of specific orders. You are guaranteed to be baffled half the time by what you find.

My eyesight is so bad now that in the field I barely recognized the critter as an animate object, let alone a beetle. The thing measures about two (2) millimeters, and the only reason I noticed it at all was that it was crawling on the base of a tall, plastic-covered utility box of some kind (for electrical or cable I assume), beneath a large cottonwood tree in our residential Colorado Springs neighborhood. I coaxed the critter into a vial so I could take a few more images indoors. 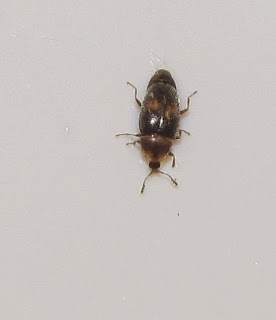 Consulting several references, I learned a little more about corylophid (Korry-LO-fid) beetles. There are 61 species in ten genera (plural of "genus") found north of Mexico, and my particular specimen probably belongs in the genus Clypastraea. Collectively, minute hooded beetles are generally very small (surprise!), and have the head concealed by a shelf-like projection of the pronotum (top of thorax). They feed as larvae and adults on fungal spores. Different genera and species find such morsels in a variety of habitats from the surfaces of leaves and flowers to crevices in bark, or nests of birds, or in leaf litter. Clypastraea is apparently most often found in fungi and mold in rotting wood and under bark on dead trees. 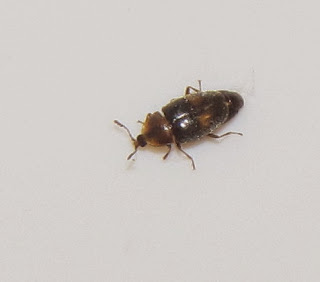 I have learned not to ignore the small insects, as that is where the real diversity and strangeness occurs. Finding a whole new (to me) family of beetles is a really exciting experience, one I hope that my readers will share in during their own searching.