Growing up in Oregon, all I knew initially of antlions was what I read in books. The insects are members of the family Myrmeleontidae in the order Neuroptera. So, they are related to lacewings, mantispids, spongillaflies, and their kin. I wasn't even sure antlions could be found in the Pacific Northwest, but I was fascinated by the "pits" that the larvae supposedly dug to trap ants and other insects. 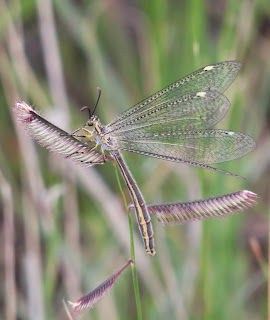 The images in books never gave a sense of scale, so I imagined that the funnel-like holes must approach the size of a saucer. Ha! Most antlion pits are about the diameter of a quarter, as shown in the image below. 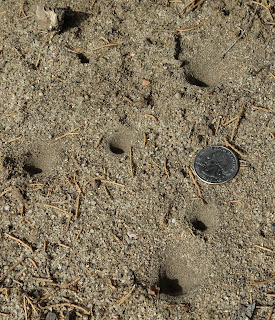 Sometimes they are larger, but the size of the crater does not correspond to the size of the larva that digs it. The breadth and depth has more to do with soil texture, and whether there is a slope or not. 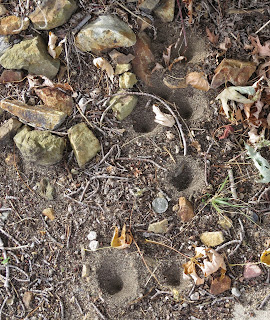 Antlion larvae might be considered among the ugliest and/or most terrifying of insects, and indeed they must be to their victims. Most are about the size of a large pea, but they are wrinkly, studded with spines, and with spindly legs. Their most remarkable feature is a pair of long, hooked mandibles. 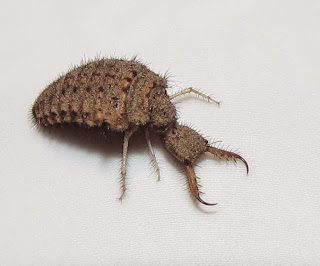 Ironically, these mini-monsters are best known by the cute moniker of "doodlebugs." They can create random, cursive "doodles" in sand in the process of finding a new place to dig a pit, and that may be the source of the colloquial name.

Actually, it is only larvae of the genus Myrmeleon that make the trademark pits here in North America. Pretty much all the other genera simply bury themselves just below the surface of the soil and wait with jaws agape for a hapless insect to pass by. 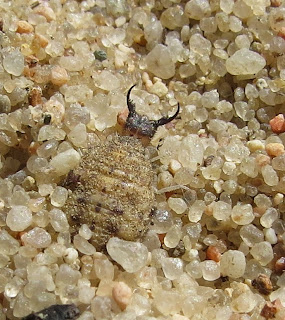 Myrmeleon larvae can only walk backwards, but they do so rapidly. They dig a pit by walking in reverse, and in a spiral, throwing sand with their jaws and the flattened top of their head. They then lie in wait beneath the soil at the very bottom of the pit. The sloping sides of the funnel are highly unstable and any small insect that reaches the lip of the trap begins descending immediately. The larva senses the vibrations and throws additional sand onto the victim to hasten its doom.

The jaws of a doodlebug are hollow, and the larva injects a cocktail of enzymes that paralyzes its victim and begins extra-oral digestion of its tissues. The doodlebug then reverses flow, imbibing the liquified innards of its prey. The resulting dry carcass is then catapulted out of the pit with a violent thrust of the antlion's head. 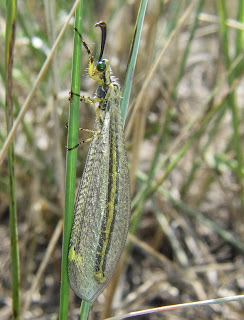 Doodlebugs more than make up for the horrid appearance of their youth by metamorphosing into delicate, slender, lacy-winged adults that superficially resemble damselflies. These fairy-like insects fly clumsily, and are most often seen among tall grasses, especially at dusk. 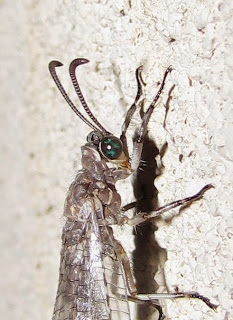 Note the short, thick, clubbed antennae that instantly distinguish them from damselflies. Males frequently have a much longer abdomen, tipped with bracket-like claspers. This is especially true of the genus Scotoleon. 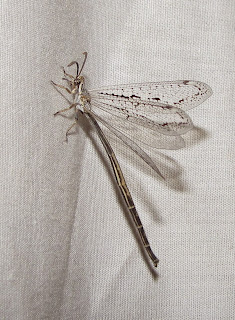 Despite the fact that adult antlions are fairly large, they are ridiculously cryptic. I have personally witnessed flying antlions alight on grass stems or twigs, and instantly align themselves so perfectly as to be essentially invisible. Dark spots and speckles on the wings break up their outline, but they also flatten themselves seamlessly against the substrate. 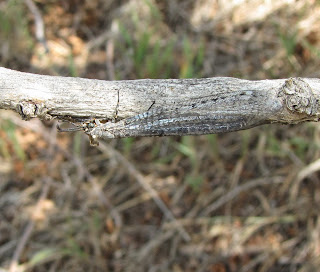 There are eighteen (18) genera of antlions recorded north of Mexico, with 94 species. Some are truly spectacular, like the three species in the genus Glenurus that sport black, white, and pink wingtips. 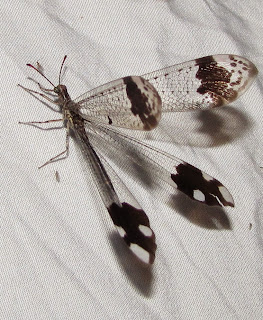 The genus Vella includes three species, which are true giants. Adults have a wingspan of 100-120 millimeters or more. They are found in about the southern third of the U.S., and are frequently attracted to lights at night. 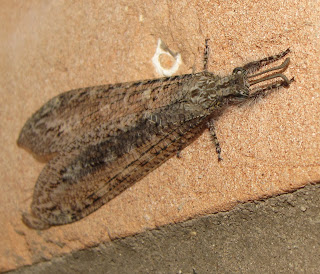 Look for the larval pits of Myrmeleon in fine, powdery soil, or sawdust around rotten logs. Where there is one there are usually several. Prime situations for such colonies are at the base of trees, beneath rock overhangs, under bridges, the dirt floor of old barns and sheds, and any other situation that remains perpetually dry. They can be in exposed situations, but I find that is rarely the case. 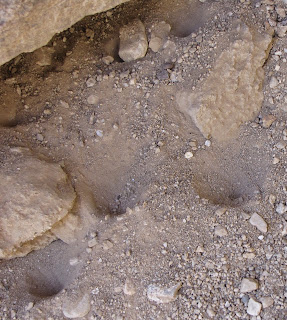 Watch for adult antlions at your porch light at night.

You can tickle doodlebugs at the bottom of their pit with a grassblade or twig, and get them to throw sand or grab the offending object. You can also keep them in captivity by providing a fairly deep container of fine sand and periodically dropping in ants and other invertebrates. They can take down surprisingly large prey. 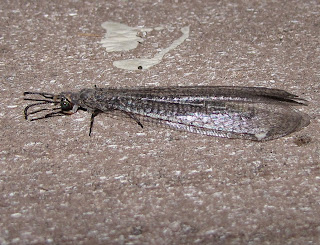 Antlions pupate inside a silken capsule the larva spins underground, incorporating grains of sand into the cocoon. 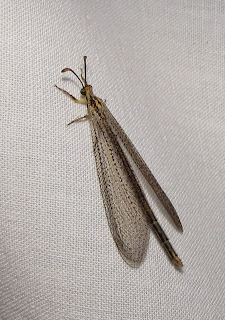