There is seemingly no end to the diversity of short-horned grasshoppers, family Acrididae, here in Colorado. Hiking the Rock Island Trail, a concrete bicycle path through east Colorado Springs, I added the thirty-ninth species of acridid I've seen here. Initially, I thought it might be a freshly-molted specimen of a familiar species since it was so very pale. On closer examination it proved to be a well-hardened adult of the Cudweed Grasshopper, Hypochlora alba. 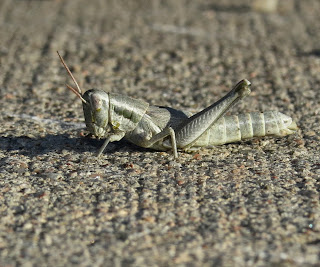 Here it was, very late in autumn on October 24, yet there were still large numbers of grasshoppers present in the scrub and grassland habitat along a sandstone ridge that parallels the trail. Vegetation here is a little different than on the plains proper. Sure, there is still yucca, prickly-pear cacti, and rabbitbrush, but also Gambel's Oak, elm trees, cottonwoods, and other plants characteristic of upland habitats. Insect diversity is correspondingly unique.

The Cudweed Grasshopper, also known as the "Mugwort Grasshopper," is not a large insect. Males average 15 millimeters, females like this one only 20 millimeters, maybe slightly larger. This is decidedly a species of the Great Plains, found from southern Saskatchewan and Manitoba south through eastern Wyoming and Colorado to extreme western Minnesota, most of Iowa, Kansas, extreme northwest Missouri, Oklahoma, and north-central Texas. Adult specimens occur late in the season, from August through October. 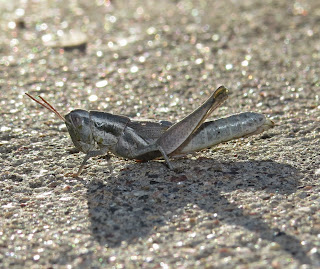 What makes Hypochlora alba truly unique is that it is *not* a generalist feeder. While most 'hoppers enjoy munching various grasses and/or broadleaved herbs, the Cudweed Grasshopper feeds almost exclusively on Cudweed Sagewort, Artemisia ludoviciana. At least, it certainly doesn't stray far from other Artemisia species.

A. ludoviciana is a silvery-gray plant that also goes by the aliases "Silver Wormwood," "White Sagebrush," "Western Mugwort," and "Gray Sagewort" among others. I had to look it up online and I'm still not sure that it looks familiar. Then again, my "search image" is usually for insects, not plants. 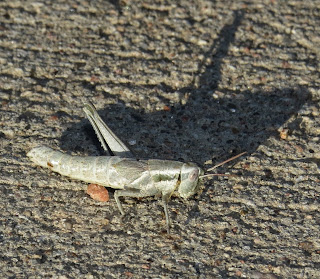 One cannot always choose the best specimens as photographic subjects, and such is the case here. This is a female, missing one hind leg. She *is* an adult, though, despite the short wings. Many spur-throated grasshoppers in the subfamily Melanoplinae are short-winged, or have short-winged individuals or populations, which can make identifying them problematic, especially for novice entomologists. Further, species identification often hinges on the configuration of the male genitalia, cerci, and subgenital plate. Females don't have all of this....hardware.

I have to say I admire the subtle beauty of grasshoppers. They are supremely adapted to their habitat and food plants, so it takes patience and persistence to even notice them most of the time. Go take a look in your own neighborhood and see how many species you can find. You will be surprised, I guarantee it. 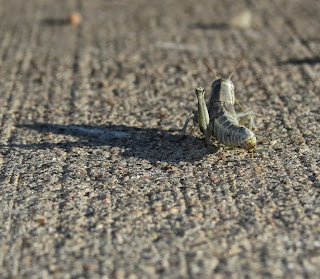