I first wrote about the Pigeon Tremex horntail wasp, Tremex columba, back in September, 2012. At that time I had not seen a female of that species here in Colorado. That all changed on the afternoon of August 22 when I witnessed two females of this species laying eggs (ovipositing) in an elm tree at my workplace, a plant nursery here in Colorado Springs. 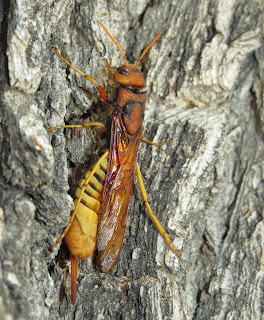 Horntail wasps belong to the family Siricidae. They are mostly large, cylindrical wasps, the females of which have intimidating spear-like organs protruding from the end of the abdomen. They use this "ovipositor" and its associated appendages to bore into trees and lay their eggs. The larvae that hatch tunnel through the wood, aided by a wood-softening fungus that is deposited by their mother at the time she lays her eggs. 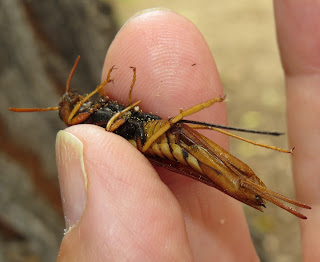 Horntails get their name not from the ovipositor, but from a knob or spur at the tip of the abdomen above the ovipositor in females, but present in both genders. This “cornus” is a feature of the larva, too, aiding the grub in locomotion. The function of the cornus in adult wasps is apparently unknown.

The video below shows the female wasp already engaged in oviposition. Her ovipositor is the black rod perpendicular to her body under her hind leg. The rhythmic movements of her abdomen probably help drive the organ deeper into the wood. The pair of pale appendages extending from the tip of her abdomen function as a sheath that protects the ovipositor when it is not in use.

One reason the mother horntail attempts to lay her eggs deep inside the tree is to keep her offspring out of reach of giant ichneumon wasps and ibaliid wasps that lay their eggs on horntail grubs. 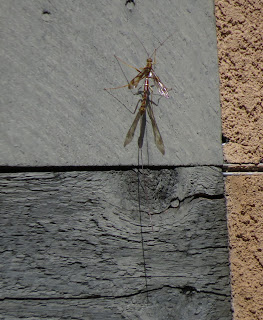 Most horntail species are not considered pests because they will lay their eggs in dead, dying, or weakened trees. A handful of species have made their way to the United States from Asia and elsewhere, and those are invasive species that have no known natural enemies here in North America.

The favorite hosts for the Pigeon Tremex are maple and beech, but obviously elm is also acceptable, along with apple, poplar, oak, and other hardwoods. It takes one to two years for a horntail wasp to complete metamorphosis from egg to adult. 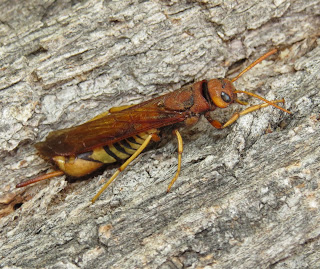 Sometimes, the female wasp dies in the act of ovipositing, or is consumed by a predator during this lengthy period of vulnerability. Indeed, on September 4 I found a deceased wasp still embedded in the tree where she was ovipositing; and nearby were the remains of another, just the needle-like ovipositor protruding from the tree trunk. 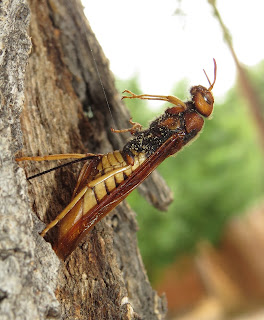 This is the time of year to be watching for the Pigeon Tremex in your neck of the woods. Watch for their giant ichneumon parasites, too. You might have to spend a lot of time looking up and down dead trees, though.