The other day (Monday, June 6 to be exact) I was exploring Adams Open Space behind the public library in Fountain, Colorado with my wife. I happened to notice a small ichneumon wasp on the underside of a leaf and snapped a couple of images. This was the best one, and I was shocked to see a cluster of eggs beneath the wasp's abdomen. What was going on? 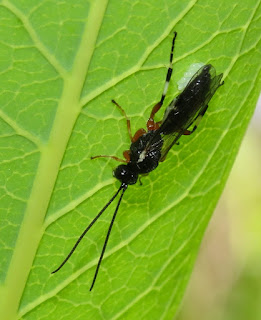 It had been my previous understanding that female ichneumon wasps deposited their eggs on or in their host, as they are parasitic on other kinds of insects (and spiders in some cases). Why was this one laying her eggs in a mass on the surface of foliage?

I posted the picture and posed that question to a Facebook group of world authorities on Hymenoptera, the order of insects to which ichneumons belong. The next morning I got an answer, courtesy of one Sasha Varga, a doctoral student in the Ukraine. First, he offered the genus identification of Polyblastus. That was surprise enough because the overwhelming majority of ichneumon wasps can barely be identified to subfamily from images alone. Thank you, Sasha!

Varga went on to explain that "as I understand, egg remains on the ovipositor after unsuccessful oviposition, but only one and why Polyblastus accumulates several eggs I really don't know." I was simply impressed with Sasha's command of the English language at this point. Ok, so now I at least have some clarified information I can run with.

Wait, Jitte Groothuis added a link to an article that might shed a little additional light. Jitte is likewise a PhD student, at Wageningen University in the Netherlands. Wow, this little observation of mine is circling the globe....

The article cited is entitled "Eggs and Egg Loads of Field-collected Ctenoplematinae (Hymenoptera: Ichneumonidae): Evidence for Phylogenetic Constraints and Life-History Trade-Offs." It is authored by Heather M. Cummins, Robert A. Wharton, and Aubrey M. Colvin, all of Texas A & M University. It was published in 2011 in the Annals of the Entomological Society of America, vol. 104, no. 3, pages 465-475. This sounds like it is over my head, too, so let's investigate together.

Apparently, an understanding of this paper hinges on an understanding of the differences in life histories between various groups of ichneumon wasps. Some ichneumons are "idiobionts," which means that further development of the host insect is arrested at the time it is parasitized by the idiobiont. Typically, a pupa stage is targeted, but sometimes a larva host, and the ichneumon wasp larva is invariably an external parasite. Idiobiont ichneumon wasps are also much more likely to be "generalists" with a wider range of host insects they can expolit.

Other ichneumon wasps are "koinobionts," meaning that the host organism continues its development at least until the wasp larva completes its development, at which time the host often (usually?) dies. Koinobionts can be either external or internal parasites, though the wasp larva is usually attached to the host, never straying to another host or otherwise moving freely away from the host. Koinobionts are also much more likely to be specialized on a narrow range of host species, in contrast to the generalist idiobionts.

Our Polyblastus here is a koinobiont. In its larval stage it is an ectoparasite (external parasite) of sawfly larvae. The adult wasp emerges from the cocoon spun by the host sawfly larva. This makes sense. We even found a female Elm Sawfly, Cimbex americana at the same location on the same day, so we know potential hosts are present.

According to the abstract of the article, the egg loads of female koinobionts like our Polyblastus are "significantly larger" than the egg loads of idiobiont ichneumons, though the eggs themselves are smaller in koinobionts. Unfortunately, an abstract is all I could find online. I will amend this post should I secure a copy of the entire paper. Maybe having so many eggs, our female wasp is forced to carry some of them externally? How does she keep from losing some simply in the course of searching for a host? How does she manage to attach her eggs to the host one at a time (assuming she deposits ova singly)?

Once again, an innocent observation turns into a convoluted and puzzling mystery. That is exactly what I love about entomology, though. It is a science that keeps you in a constant state of awe, forces you to think imaginatively, and challenges your research skills to the maximum.