Those "bee blocks," chunks of wood with holes of varying diameters drilled into them, are all the rage now for attracting solitary native bees like leafcutter bees and mason bees. They do work, no matter where you live, and I have proof. Ok, so the first occupant in our newly-hung bee block is actually a wasp, but that is also a good thing, and I'll explain why. 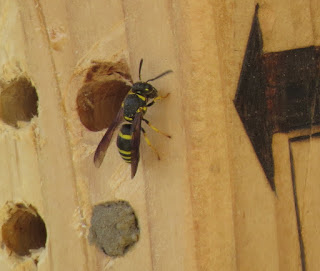 A bee block need not be as fancy as the one shown here. There are some standards you should adhere to, though, and a thorough explanation is found here. Solitary bees come in a variety of sizes, so having a good selection of various diameter holes is helpful.

Why am I excited that a solitary wasp is using our block? Wasps are "flower visitors" that go to flowers strictly for nectar to fuel their activities (think gas station, not grocery store), but they do a fair bit of pollinating in the process. The biggest benefit of wasps, though, is that they are parasitoids of insects we consider pests. 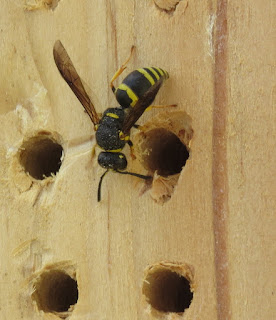 The scenario for the mason wasp using our nest box, Euodynerus foraminatus, goes like this: The female wasp catches and paralyzes a caterpillar, and flies it back to the nest hole where she stashes the victim, and usually several more, as a larder of food for a single larva offspring. She lays an egg on the first or last victim, and then erects a mud partition. She repeats the steps, such that one of those holes you drilled might end up filled with several cells, each holding numerous caterpillars that won't be eating your garden plants. The preferred prey of E. foraminatus are larvae of moths in the families Oecophoridae, Tortricidae, Gelechiidae, Pyralidae, Crambidae (subfamily Pyraustinae). All of these include some notorious pests, as well as caterpillars that conceal themselves in rolled or tied leaves that other wasps won't go to the trouble of extracting. 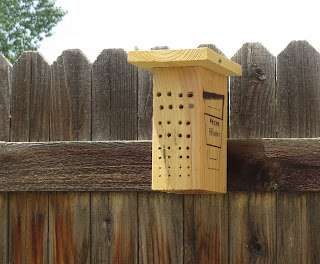 We know at least one nest tunnel is complete because it has been plugged with mud. You can identify the different types of bees and wasps using a "bee condo" by the kinds of closures they make. Some megachilids (mason and leafcutter bees) will make the final closure with a plug of chewed-up leaves. Other bees will plug a nest hole with plant resins. 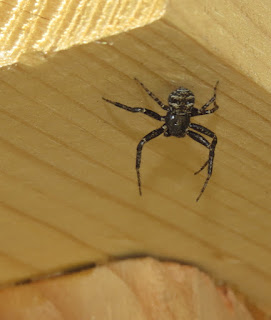 Besides the comings and goings of the bee block inhabitants, you can get some other kinds of drama. While watching the bee block for signs of activity last Friday, I noticed a crab spider hanging out under the "eave" on our bee block. Sure enough, when the wasp approached the spider reacted, hanging of the roof and opening its "arms" in a potentially lethal embrace. The wasp ignored or never noticed the threat, but I ushered the spider to another part of our yard anyway. 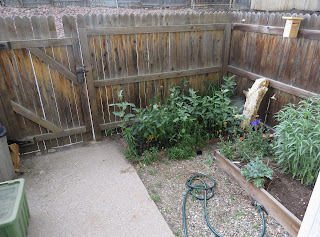 You may think that there is no way one of these boxes would work in your yard. The above image is of our yard, behind our townhouse unit. Look at it! It is literally like ten-by-twelve feet. Surely, if we can make this work, so can you. It takes virtually nothing to put one up, and it offers both critical bee real estate for the insects, and hours of entertainment for you and your family. Since solitary bees and wasps do not have vast quantities of offspring and honey stores to defend, they are not going to sting you. Besides, they are too busy working.

Back to that mason wasp for a second. Euodynerus foraminatus is a very widespread species, found coast to coast in the United States, plus all Canadian provinces, and down into Mexico, too. There is a very good chance you could attract one to your own bee block. 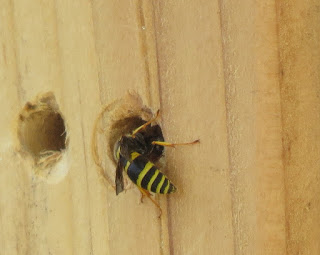