Today's identification tip involves separating two nearly identical lady beetles: the Seven-spotted Lady Beetle, Coccinella septempuncta, introduced from Europe, and the native Nine-spotted Lady Beetle, Coccinella novemnotata. There is widespread speculation that the exotic Seven-spotted ("C-7") has displaced the native Nine-spotted ("C-9"), and indeed the latter species has become noticeably scarce over most of its former range, especially in the eastern U.S., over the last 35 years or so. That is why it is critical to be able to identify C-9 and report sightings to the Lost Ladybug Project. 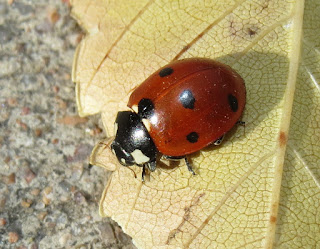 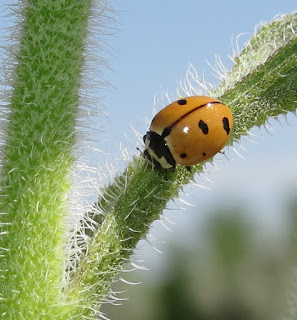 Meanwhile, the wing cover (elytron) of the Nine-spotted Lady beetle does bear an extra black spot, located near the "shoulder." This spot can, however, be vague or even obsolete. The markings on the pronotum are much more consistent.

The Nine-spotted Lady Beetle is usually slightly smaller than the Seven-spotted, and is more often a creamy orange in contrast to the brighter orange, or red, of C-7. Both species are polished (shiny) in texture, and highly convex or nearly hemispherical in shape. 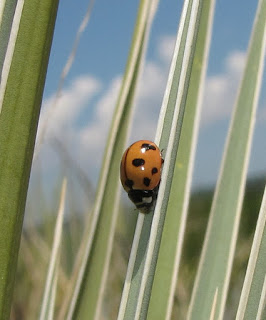 Heavier spots on this C-9

There is little difference in behavior between these two species. Both are predators of aphids and can be found on plants hosting aphid colonies. 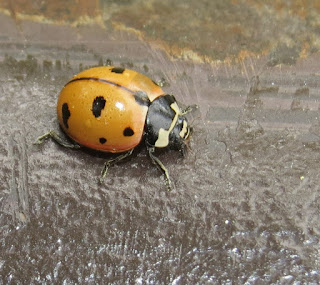 Another example of the Nine-spotted Lady Beetle

Habitat is not a good way to distinguish these two lady beetles, either. Both occur in a variety of ecosystems, from vacant lots, yards, gardens, parks, and forest edges to orchards and agricultural fields. 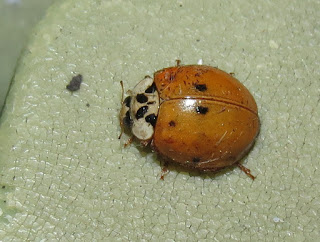 A nearly spotless form of the Multicolored Asian Lady Beetle
There are a surprising number of nearly identical lady beetle species, and simply counting the spots is a very unreliable way of making an identification. There is extreme variability in many species, especially the abundant Multicolored Asian Lady Beetle, Harmonia axyridis, which is yet another non-native ladybug. Not only does the number of spots on the elytra vary, but so do the markings on the pronotum. This species needs to be ruled out before you try and conclude whether your specimen is a C-7 or C-9. 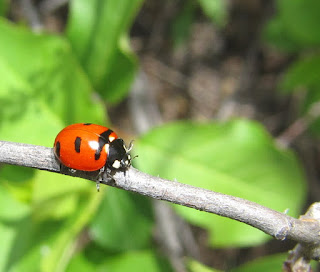 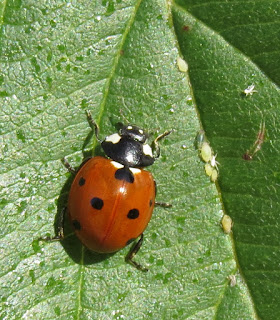 Quiz Photo: Which species is this one?

Please keep a lookout for the Nine-spotted Lady Beetle where you live and during your travels. The more eyes in the field, the better will be our understanding of the status of this species, which has been the state insect of New York since 1989. Thank you.