I do not know what it says about our field excursions this year, or the state of our local fauna, or the state of our country, that we are finding carrion beetles to be the most interesting creatures we have observed so far. Case in point is the Western Spinach Carrion Beetle, Aclypea bituberosa, spotted by Heidi on Monday, February 20. We were walking the Front Range Trail in Clear Spring Ranch park, an El Paso County, Colorado park when we crossed paths with this unique beetle. 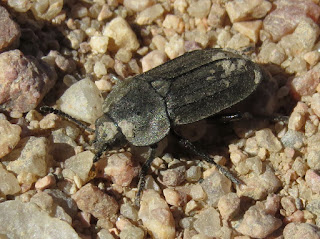 I happen to like spinach, especially fresh spinach, so I was disappointed to learn that the Western Spinach Carrion Beetle is considered an occasional pest of that plant. The adult and larval stages both feed on a variety of plants, including pumpkin, squash, beets, wheat, radish, rhubarb, potato, lettuce, cabbage, turnip, and rapeseed. Beets and spinach suffer the most damage in May. Aside from these crops, they consume lamb's quarters, povertyweed, and other native and introduced members of the plant family Chenopodiacea; and also nightshade (family Solanaceae).

The adult beetles emerge early in the spring, so apparently finding one at this time of year is not too unusual. Females lay their eggs in soil shortly thereafter, and in about a week the larvae hatch. The larvae feed during the day on young leaves and shoots of their host plants, hiding in the soil at night. There are three instars, an instar being the interval between molts of the exoskeleton to allow the insect to grow larger. The first two instars each last about five days, the third instar taking an average of fifteen days before the molt into the pupa stage. Mature larvae, black in color, are about 11-15 millimeters long. The pupa is buried one to two inches deep in the soil. The adult beetle emerges from the pupa in about three weeks. Thus there is one generation each year, the beetles overwintering as adults. 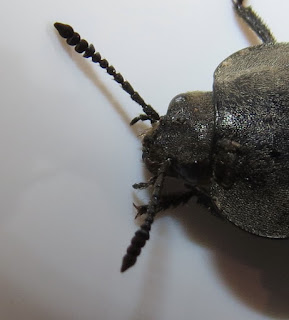 Note the "cleft lip" just behind the jaws

These are small insects as carrion beetles go, only 12-17 millimeters in length. They resemble several other carrion beetles but for a couple of features. The diagnostic character for this genus is the cleft labrum, or "upper lip" if you will, just behind the mandibles. The deep notch leaves no doubt as to the identity of the beetle. There are two species in the genus, but Aclypea opaca, the "Beet Carrion Beetle," is restricted in North America to Alaska and the Northwest Territories. It appears to be native to northern and central Europe, being introduced accidentally to North America.

The other feature that helps identify A. bituberosa is the pair of raised tubercles, one each near the rear of each elytron (wing cover). There are three conspicuous longitudinal ridges on each wing cover as well. 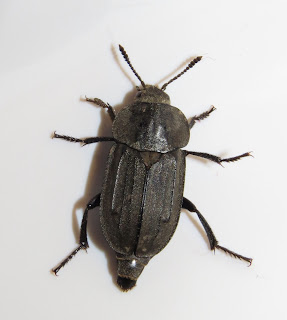 The beetle cleaned up and photographed at home

The Western Spinach Carrion Beetle is just that: a species confined to the northwest quarter of the U.S. and adjacent southern Canada, from British Columbia and Washington state south to central California east of the Sierras, and eastward to northeast Nebraska and southeast Manitoba. It is more common east of the Continental Divide, less so in the Pacific Northwest. The adult beetles are active from March through November, and occur both on the plains and in mountain meadows.

While I find carrion beetles quite fascinating, I cannot help but hope to find less morbid insects in the coming months, creatures that reflect the true optimism of spring. Plus, I need to start eating a little healthier, and this particular beetle is competing for "my" veggies.