In service to my colleagues who have waning patience as they are bombarded with the latest social media sensation, I offer this explanation to the moth with the "tentacles" coming out of its posterior. Here is the circulating image, but there is also a video that is associated with most Facebook posts. 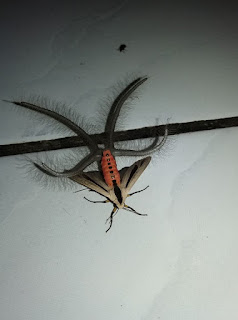 Ok, first things first. This moth is Creatonotos gangis, an arctiine (tiger) moth from southeast Asia and Australia. The specimen shown is a male. He is everting his androconial glands or coremata (Greek for "feather duster"). The glands are normally concealed within his body, and are inflated at will by air pressure or blood pressure. Less dramatic versions of these organs are known as "hair pencils." Usually concealed within his abdomen, the coremata are deployed when he is seeking acceptance by a mate. 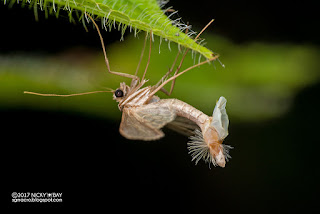 Wait, you thought female insects were the ones using pheromones (scents used mostly to attract the opposite gender, but with other functions, too, especially in social insects)? Well, me, too, so I did a little digging. Turns out that the male's sexual chemicals are not meant for long-distance attraction of females, but to communicate his "fitness" as a mate. So, the products of androconial glands have been likened to aphrodisiacs, tranquilizers, or narcotics, aimed at seducing the female. Ok, but how? It is a long story.... 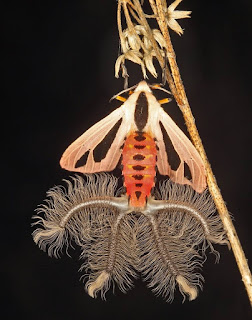 As caterpillars, many tiger moths (subfamily Arctiinae of the owlet moth family Erebidae) feed on toxic plants. Milkweed is a good example. The plant is packed full of cardiac glycosides, potent poisons intended to discourage herbivores, including caterpillars, from consuming it. Not only are some caterpillars able to overcome the toxicity, they incorporate it into their own bodies to make themselves toxic to their predators. This is called sequestering, and the commandeered poison stays with the insect throughout metamorphosis and into adulthood. One of the byproducts in male moths is the pheromone emanating from those androconial glands. He thus demonstrates to the female that he is genetically superior based on a greater quantity of accumulated toxins that she can then pass on to her offspring. 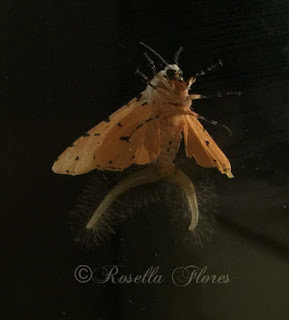 This is a relatively dry explanation of these remarkable structures in male tiger moths. You owe it to yourself to be better entertained and further enlightened by an article in Wired magazine by my good friend and colleague Gwen Pearson. Even the graphics are better, and a GIF has never been funnier, at least in the context of entomology. 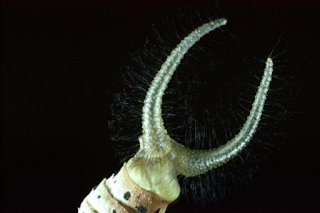 So, far from "terrifying" as a similar viral graphic was labeled in a headline from Huffpost, these glands are an amazing example of evolution, just like elk antlers and other male adornments. Please share the fascination, without the sensationalism. Thank you.