Last week I introduced you to a social wasp called the ”Mexican Honey Wasp” in the family Vespidae, subfamily Polistinae. That species appears to be the model for a mimicry ring involving several unrelated solitary wasps, and a type of soldier fly….and those are only the ones I personally know about.

One of the best of these mimics is Pachodynerus nasidens, a mason wasp in the family Vespidae, subfamily Eumeninae. It goes by the common name “Keyhole Wasp,” but I have heard that epithet applied to other wasps as well, so will stick with the Latin here. 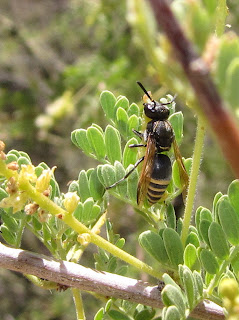 The markings of this wasp are essentially identical to those of the Mexican Honey Wasp, and a cursory look is not enough to distinguish the two. Oddly, Pachodynerus nasidens has at least a slightly broader range than Brachygastra mellifica, occurring in southern Arizona, Brownsville, Texas, and Plantation Key in Florida, as well as throughout Mexico, Central America, and the Antilles. Interestingly, it has been “exported” accidentally to Hawaii and Micronesia. The U.S. range strongly suggests that the Mexican Honey Wasp should turn up in the same areas (indeed it is found in Texas but is thusfar considered absent from Arizona and Florida).

Females of the solitary Pachodynerus nasidens build mud cells inside the abandoned nests of mud daubers (Sceliphron caementarium and Trypoxylon politum), or in other pre-existing cavities. It has been rumored that the females sometimes build their own free-standing mud nests, and these images would tend to substantiate that supposition. Inside, each cell is provisioned with paralyzed caterpillars that will be the food for the single larval wasp that develops there.

Enemies of this wasp are many, and include at least one species of cuckoo wasp in the genus Chrysis. Recall that cuckoo wasp females lay their eggs in the nests of other wasps. Melittobia chalybii, a tiny parasitic wasp in the family Eulophidae is also known to infest the nests of P. nasidens. Likewise, the sarcophagid satellite fly Amobia floridensis can infiltrate a nest, depositing her tiny larvae there. Acrobat ants (Crematogaster sp.) are recorded as predators, presumably breaking into nests to prey on the immature stages of the wasp. Wedge-shaped beetles in the family Ripiphoridae, genus Macrosaigon carry out their bizarre life cycle inside the nests as well. 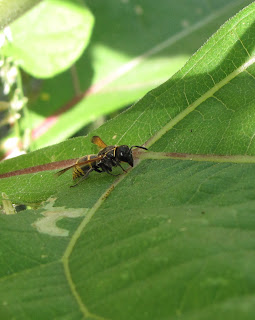 There is another species of Pachodynerus found here in Arizona: P. guadulpensis. Older references list it as P. praecox. It ranges into from Mexico into southern California, Arizona, and Texas. Note the extra yellow stripe across the *front* of the abdomen that distinguishes this species from P. nasidens. The specimen imaged above was discovered in the butterfly garden at the Tucson Botanical Gardens in the middle of Tucson.

I’m hoping to learn more about these wasps, and complete my findings on the mimicry ring, sometime in the not-too-distant future. Meanwhile, please share your own observations here, and in your own blogs.