I recently had the honor of reviewing an article about wasps destined for a national magazine. One of the few inaccuracies I found was the assertion that while bees make honey, wasps do not. Putting aside the fact that only social species in the family Apidae make and store honey (the vast majority of bees are solitary and do not manufacture honey), it is also incorrect to say that no wasps produce this sweet substance. Case in point: Brachygastra mellifica, a tropical social wasp that sneaks over the border into Texas and possibly Arizona. 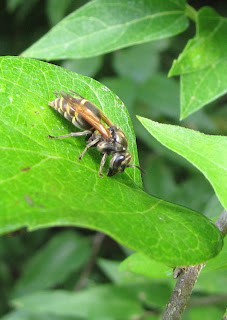 Known as the “Mexican Honey Wasp,” this species is a member of the family Vespidae and the subfamily Polistinae. They are small insects, only 7-9 millimeters in length. The specimen imaged here is one I spotted at a trailer park resort in Mission, Texas, adjacent to Bentsen-Rio Grande Valley State Park. It was one of several different hymenopterans lapping up honeydew from an aphid-infested shrub.

While the wasps themselves may be diminutive, their paper nests are not. A large nest can be a foot in diameter and composed of up to 50,000 individual cells. The paper combs and envelope are contiguous, the cells being very shallow. Honey is stored in uncapped cells, unlike in honeybee colonies where the storage cells are capped with wax. Nests, usually constructed in low trees, can be occupied for years in the tropical and subtropical climate favored by the wasps.

Brachygastra mellifica is considered to be a mostly docile species, but one would still be wise not to antagonize a nest. Dr. Joan Strassmann, Harry C. and Olga K. Wiess Professor in the Department of Ecology and Evolutionary Biology at Rice University, warns that they “….can explode, attacking en masse.” Considering that an average nest can house between 3,000 and 18,000+ worker wasps, it pays to exercise caution. 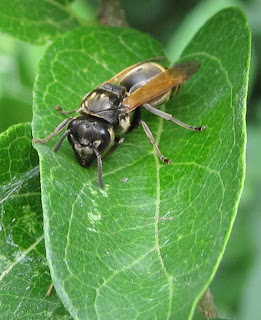 Still, the prospect of getting stung multiple times has not deterred people from exploiting these wasps since ancient times. Several references exist that document the harvesting of honey from nests of Brachygastra species (there is more than one) by indigenous peoples in Brazil and Mexico. More recently, rural peoples may transplant small nests into their yards and gardens, allowing the colonies to expand, then routing the resident wasps with smoke and destroying the combs for the honey. The wasps will re-build and start the cycle anew. You eat the honey at your own risk. Nectar collected by the wasps from plants like Jimsonweed (Datura) can translate into toxic honey.

Humans are not the only animals that covet the wasps’ cache of honey. Woodpeckers are known to break into the nests for the sweet stores of honey, and small mammals probably pilfer honey as well.

I want to thank Matthias Buck at the Royal Alberta Museum in Edmonton for identifying my images as being the species Brachygastra mellifica. There is a solitary species of vespid wasp that looks virtually identical to B. mellifica. Mexican Honey Wasps are easily distinguished by their petiolate abdomen (read “wasp waist”), but the petiole is short and nearly vertical, making it difficult to detect in live, moving specimens. Tune in next week when I’ll introduce that solitary imposter! 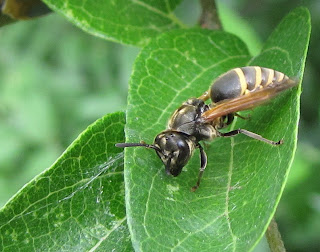 Sources: A great, in-depth article on the Mexican Honey Wasp can be found at the Texas Entomology website. Additional links can be obtained at the BugGuide species page.