“This town ain’t big enough for the both of us” is a movie cliché and a song title by the band Sparks. It is also what many male butterflies are likely saying to each other, out in the wild and inside Butterfly Magic. Mating success for males frequently depends on whether they can defend a territory. Other male butterflies will try and usurp their position at every turn.

Inside our greenhouse, which is arguably not big enough for any butterfly let alone the couple hundred or so that occupy the space at any given time, territorial behavior is very obvious, and takes several forms. Male Blue Morphos will chase each other down the paths in trains of two, three, or more. Paper Kites do not interact with Morphos in the wild, given that they are on separate continents. Nonetheless, they appear to treat Morphos as intruders and chase after them. 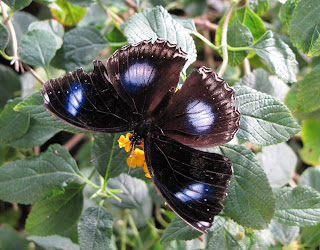 Meanwhile, the Great Eggfly, Hypolimnas bolina, defends his territory from a perch, rather than on the wing. Males of this species frequently alight on visitors, often atop their heads or hats. The taller the person the better, giving the male a superior vantage point from which to scan for females or other males. The male dashes off to investigate a potential mate or competitor, but may return to his perch just as fast. When a rival male fails to heed a warning confrontation by the resident male, the dispute can escalate into something remarkable. The males will engage in a type of ritualized combat in which they fly in a tight circle at dizzying speed. The light bouncing off their electric purple spots while they whirl at warp speed is a spectacular visual effect. Maybe one of them gets dizzy, too, as eventually one will peel off and look to establish a territory elsewhere. Consider that males want to be where females have to be. Females will need to lay eggs on host plants suitable for their offspring. Therefore, males often establish territories in the wild that include stands of the host plant. There’s more on that here in this PDF.

On March 18, in the Bird Garden outside the greenhouse, I had the opportunity to witness a Mourning Cloak Butterfly, Nymphalis antiopa, demonstrate his own territorial behavior. He darted from a perch to chase off all comers, including a Giant Swallowtail and a Pipevine Swallowtail. He then returned to his “hood,” at one point alighting on a visitor’s ballcap. The determination of these males to rout all intruders is amazing. The energy expended must be immense. Still, the Mourning Cloak glided back to his perch, conserving wingbeats. 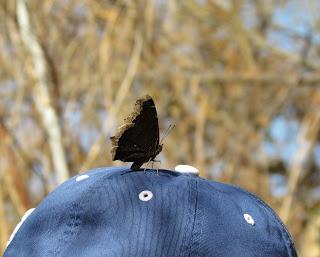 Last year at about this time I climbed to the top of Sentinel Peak (“A” Mountain), and was treated to a battle between male Black Swallowtails, Papilio polyxenes. Each wanted the very summit of the butte to himself. When they crossed paths while patrolling their “beats,” they frequently collided with audible force, wings banging violently. A subsequent visit a couple weeks later found at least one male remaining, badly tattered, wings frayed and tails missing. He was alive—a survivor guaranteed to pass along his genes to the next generation. 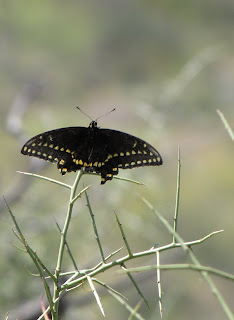