We were fortunate to have hosted three species of giant silkmoths (family Saturniidae) in Butterfly Magic this year. They are spectacular insects, but so unique and short-lived that one cannot generalize to moths as a whole from their life cycle and behavior.

Estimates differ as to how many species are in the Saturniidae, but somewhere between 1,300 and 1,500 is fairly accurate. Gene sequencing could result in more or fewer species than currently recognized. Giant Silkmoths are found the world over in forest habitats, but are especially diverse in the neotropics (Mexico, Central and South America). You are probably already familiar with some U.S. species: the Luna Moth, Cecropia Moth, Polyphemus Moth, Royal Walnut Moth, Imperial Moth, and Cynthia Moth. Not all the silkmoths are giants. Buck moths (genus Hemileuca) are much smaller, and fly during the day.

The adult moths do not feed. They have vestigial mouthparts at best and fuel their flight on fat reserves accumulated as caterpillars. Consequently, the caterpillars of giant silkmoths are large and heavy at maturity. The “hickory horned devil,” larva of the Royal Walnut Moth, approaches the size of a frankfurter. It looks menacing but is harmless.

Meanwhile, the larvae of other silkmoths are studded in venomous spines. Beware the caterpillars of buck moths (I can attest from personal experience!), the io moth, and especially the South American Lonomia (see also more recent articles in medical journals). 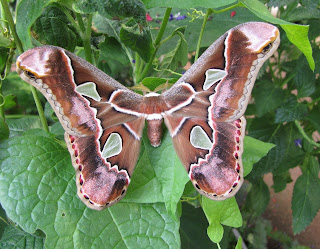 The Forbes Moth, Rothschildia lebeau forbesi, is frequently mistaken for an Atlas Moth by our visitors. Both species have “windows” in their wings that are devoid of scales. The Forbes Moth ranges from the Lower Rio Grande Valley through much of eastern Mexico and south to Brazil. Relatives of this moth figure prominently in the culture of indigenous peoples. Bushels of cocoons are harvested to make rattles worn on the ankles during ceremonial dances. 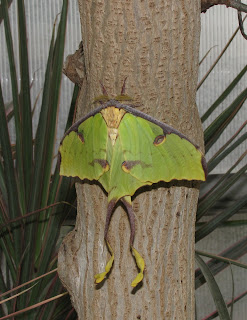 The African Moon Moth, Argema mimosa, occurs over most of sub-Saharan Africa. Their cocoons are distinctive: compact, and made of dense silk with numerous small perforations. The adult moths are spectacular: a wingspan averaging 125 mm, yellowish green in color with long, streaming “tails” on the hindwings. What purpose those tails serve is open to speculation, but perhaps it further camouflages the insect when it is at rest among foliage.

Last but not least is the Atlas Moth, Attacus atlas, a real giant with a wingspan of 240 mm (compare that to the Forbes Moth, only 90-100 mm from wingtip to wingtip). The Atlas Moth is widely distributed, from India to Hong Kong, tropical Asia in general, plus Taiwan and Indonesia. The front wings have a conspicuous lobe with markings that suggest the head of a serpent, but whether this is real mimicry or not is debatable. 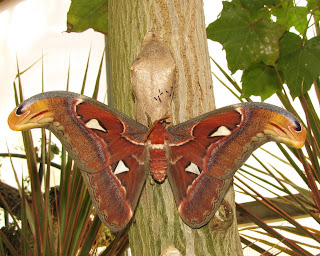 The adult females of all the silkmoths rarely stray far from their cocoons after emerging. They invest most of their energy in egg production, so instead of exerting calories in flight, they simply sit and emit a species-specific sexual attractant called a pheromone. This scent, while usually imperceptible to us, is potent when it comes to drawing males. The males, with broad wings and streamlined bodies, use their sensitive antennae to home in on the pheromones, following the scent trail up to a mile or more to find its source. Females, once mated, will then finally fly to appropriate host trees and deposit their eggs. Even unmated females will dump their eggs in great quantities, as is often seen in our greenhouse. Both genders live only a few days, assuming they can avoid predation by bats.

Breeding silkmoths in captivity is becoming quite the hobby and cottage industry. My friend Liz Day has a web page devoted to helpful hints for rearing common eastern U.S. species. Considering the threats faced by these magnificent moths, from suburban sprawl and light pollution to introduced parasites, our domestic species could use some help.

I would like to conclude by recommending Wings of Paradise by John Cody, published by University of North Carolina Press, 1996. Cody renders giant silkmoths in stunning watercolor paintings. He features all three species in the greenhouse, plus scores more. The art is complemented with anecdotes and factual information.