I like to throw my readers a curve periodically, and present a wasp mimic instead of a true wasp, just to keep everyone on their toes. Today’s installment features a family of flies that not only look like wasps, but some species are parasites of them. 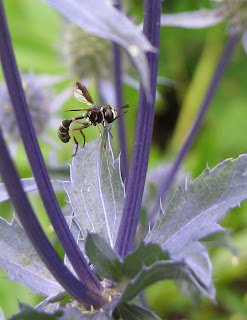 The thick-headed flies in the family Conopidae are fairly common, but not often seen. Their common name does not come from a belief that they are especially stubborn or “dense,” but because their heads are quite large in proportion to the remainder of their bodies. Most of them do like to frequent flowers where they imbibe nectar, but they have a far more sinister side. About 66 species occur in North America, in nine genera.

Thick-headed flies can be recognized in part by their beak-like mouthparts, used to sip nectar, not blood. Those in the genera Physocephala and Physoconops greatly resemble potter wasps. The abdomen is elongated, like a “wasp waist,” and the front margin of the wing is heavily pigmented, mimicking the longitudinal fold in a potter wasp’s wings when the wasp is at rest. Pictured above is Physocephala tibialis, 12-15 millimeters long, imaged in a butterfly garden on the University of Massachusetts campus in Amherst.

Conopids lurk among flowers for more than just nectar. This species is looking for bumble bees. The female fly will accost the bee in mid-air, maybe forcing it to the ground, and ramming an egg between the bee’s abdominal segments. The larva that hatches from the egg then feeds as an internal parasite of the bee, eventually killing it in about ten to twelve days. The larva then pupates inside the hollow exoskeleton of its host. An adult conopid fly emerges the next summer (in similar European species. Our species may have more than one generation in southern climates).

Other species of Physocephala are known to attack solitary wasps in a similar manner. P. texana is a known parasite of several species of sand wasps in the genus Bembix. Members of the genus Zodion, of which Z. intermedium is imaged below, also from Massachusetts (South Deerfield) also attack solitary wasps. They are much smaller in size than Physocephala, only 5-7 millimeters. 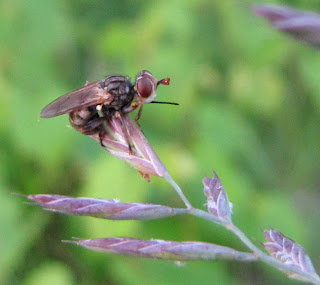 Next time you are afield, keep a sharp eye out for these living missles. Look for them on flowers and foliage and see if you can catch one in the act of assaulting a wasp or bee. 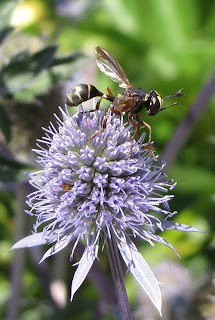