Heidi and I recently spent several days in South Carolina, mostly looking for dragonflies at a gathering of the Dragonfly Society of the Americas in Florence. We stayed with another couple at their home in Hemingway, and it was there that I encountered one of the strangest of all spider families: the Scytodidae, known commonly as “spitting spiders.” 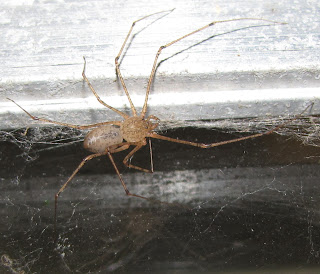 The last night of our stay, I once again prowled around the home of our hosts. Along with the moths and other insects coming to the light on the back porch, I noticed a rather large, sprawling spider at the edge of a window frame. I was puzzled by its uniform beige color, and long legs. I mentally paged through my brain’s spider files. Was it a cellar spider? Not quite right. Was it one of the dangerously venomous brown spiders in the genus Loxosceles? My eyes are not what they once (ok, ever) were, so it was not until I took an image of the critter and zoomed in that it became instantly apparent what it was. 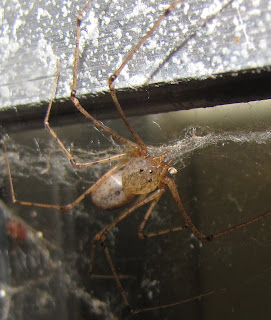 One can hardly be blamed for mistaking a spitting spider for a brown recluse or related species. The two families, Scytodidae and Sicariidae, are not that far removed from each other anyway. Spiders in both families have only six eyes, instead of the usual eight for spiders. Those eyes are arranged in a nearly identical triad pattern of three pairs. Spitting spiders frequently have dark markings on the cephalothorax, though usually not in a “violin” of “fiddle” shape. Both families are in the larger group of haplogyne spiders which possess relatively uncomplicated genital structures.

Perhaps the best way to recognize a spitting spider is by the very convex shape of its cephalothorax. This body section has to be large and domed to accommodate the arachnid’s enormous venom glands. Don’t jump to conclusions, the spitting spiders are not at all dangerous to people. However, insects, and even other spiders, should take heed.

The venom glands of scytodids are divided into two lobes, the front lobe of which houses traditional venom designed to paralyze the prey and begin the digestive process. The hind lobe of the venom glands contains large amounts of what can only be described as the arachnid equivalent of Krazy Glue.

Spitting spiders stalk potential prey cautiously, with slow, deliberate movements. When the victim is within a few centimeters, the spider lets go with a rapid-fire barrage of its sticky venom. The victim is instantly adhered to whatever surface it was sitting on. Seriously, the attack lasts a total of thirty milliseconds. No, I am not making this up. I swear, there are videos to prove it.

The “glue” is very similar to spider silk in that it solidifies into elastic threads that contract up to 50%, helping to bind the prey tightly. The threads form a zigzag pattern as a result of rapid oscillation of each jaw. The glue is shot out of each fang. 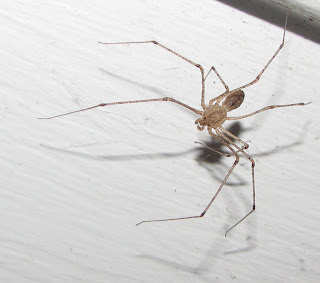 Interestingly, the long-legged species of spitting spiders also spin webs, in the traditional manner, with silk from the spinnerets at the tip of the abdomen. The webs are tangled and sheet-like, similar to those of cellar spiders (family Pholcidae). Individuals may be quite tolerant of each other, even living communally in some cases.

I found three specimens on the exterior of the house in South Carolina, and apparently several species in the genus Scytodes are often found associated with human habitations. I have not positively identified which species this is, and of the seven known species in North America, at least three are introduced from the tropics. There are also very likely more species that remain undescribed by scientists.

Female Scytodes do not build an elaborate egg sac, but simply wrap their eggs loosely in a thin sheet of silk and secure the package beneath their bodies. An average clutch varies from 20-40 eggs.

Incidentally, there are also “short-legged” species in the Scytodes genus. They tend to be found on the ground in leaf litter, or under rocks. They are strictly wandering hunters that do not spin webs.

The most widely-distributed spitting spider in North America is Scytodes thoracica, an ornately-marked animal that ranges from Canada south, west to at least St. Louis, Missouri and Ames, Iowa. This is a small-bodied spider, females measuring 4-6 millimeters, and males about 4 millimeters. The long legs make them look larger, of course. The specimens shown here were about 6-8 millimeters in body length, and may represent Scytodes longipes, one of those exotic imports mentioned earlier. 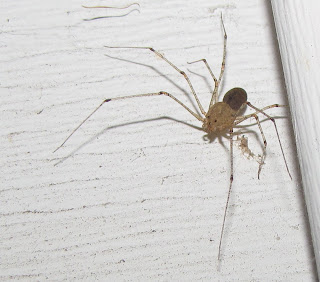